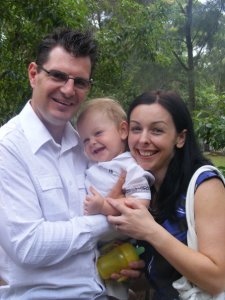 A recent discussion with a mother has got me musing – what is the perfect age gap to have between siblings?
Yes, it’s the so called $64 million dollar question that can be heard chatted about in playgrounds the world over, and one which all parents would like to take a peek into the crystal ball at. What timeframe will serve them best to go forward and procreate, to not only save their sanity, but also ensure the smooth transition into the realm of multiple motherhood?

The Husband is a product of the “short age gap” – a mere 15 months between births for my amazing mother-in-law. And, as he points out, he at least grew up with a readymade playmate on hand so there was never the opportunity for boredom to breed.

While I shudder at the thought, it’s still a common occurrence in today’s world. A friend has this same few months between her girls, and while I think they both should be awarded medals for courage and bravery for undertaking such a mammoth task requiring super human emotional and physical strength, they concur, quite casually, that its not too traumatic (unless one of said children is nursing a broken collarbone, while your husband is away on a work jaunt, leaving you home alone… Am I right Claire?)

Then there’s the camp that make the comment a large age difference will compliment welcoming a new child in to the fold. Who needs to hired help when you have a 3, 4, or (and heavens, this could well be me) 7 or 8 year old on hand to fetch the baby’s errant dummy, keep it amused as you cook dinner, and act as a veritable Nanny, assisting with nappy changing, or rocking the pram til bub is soothed to sleep. My mother-in-law (yes, same as the aforementioned who has actually experienced both circumstances) admits that when baby number three eventually made his grand entrance into this world, it was his two besotted big brothers who watched him like a hawk every waking second that she never needed to worry about his wellbeing. Sentry Number One (The Husband) and Sentry Number Two (the Brother-in-Law) kept such a close eye on him that the minute an eyelid looked like fluttering open, they swooped in to take charge. Built in babysitter, anyone?

In keeping with this larger the age gap school of thought, some advocate the more one on one time you spend with your first born equates to a deeper connection with them. You can concentrate on creating and cherishing the special moments that might be missed if you were tending to a newborn. Controversial, I’ll agree, yet it is possibly something worth considering. I, for one, struggle to imagine focusing my energies on anyone other than the child who is already the centre of our universe. But that’s the amazing thing about our human hearts. Like Phar Lap, they are a hell of a lot larger than we actually think.

I should point out, I too am a product of a relatively short age gap (by short, I mean, one I was not willing to entertain for any possible future children!). My sister was born a mere 20 months before me, and yes, I will concede it has given me a great gift, in that she is my strongest ally and best friend. Had there been more months and years between our birthdays, we would not have shared the similar path life led us down, travelling together, laughing, loving, learning and living life experiences in sync that forged a bond of true kinship. And while it will break my heart just a little that my own son wont grow up with such a nurturing, unique bond, in this day and age I believe cousins are as close as siblings – thank goodness he has three all within close age range for him to hopefully cultivate the same sort of intimacy.

Pre-parenthood, I was always a fan of the “quick turnaround”, envisaging that we’d have bred two under two. But then the financial, emotional, and physical reality sets in and you realise perhaps you were a bit premature in your grand plans to over populate the world. Of course I am not the only naïve one to have indulged in this ambitious life strategy. I’ll often enjoy a secret giggle when other expectant first time Mums start planning their future large families – all before they have even welcomed child number 1! Just survive the first child, and then come back to me with your revised parenting proposal….

And for the record, the mum who got me mulling over this million dollar mystery, and I concluded that, unlike fine wine, there is no such thing as a “good age” to uncork and enjoy the opportunity to procreate. Whether it happens far too fast (Irish twins anyone?) or Mother Nature thwarts your many attempts until you are well past your planned gap, you will have about as much control over this as you do an overtired, hungry child in the chocolate aisle of the supermarket.

Mind the Gap, everyone; no matter what the expanse between offspring ends up, you will still be watching where you step!

« Waiting to Exhale
When there’s a will, there’s a WINFREY! »