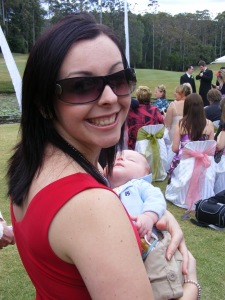 Just like the episode of “In the Night Garden” that I was forced to endure the other morning, my son, like that spiky haired and strange looked “Upsy Daisy” Character, has developed an infatuation with his own bed.

He’ll sleep like a trouper in his cot – king of his castle if you will, master of his domain. But place him anywhere else to catch some zzz’s, such as his pram, the car seat, or God forbid, the lap of a person, and I’m afraid we end up with tears – and usually next to no sleep!

I’m not quite sure how I managed to foster this strange preoccupation within my son – considering for 10 months I was at war with his penchant to cat nap only in the day. Now instead I’ve created a little someone who is so extremely comfortable sleeping in his own cot that any diversion to this regime is met with an aversion to sleep. Cue tears and mini tantrums and all of a sudden I look like a Mum who has no control in getting her son to settle for “nigh nighs” – as he calls it!

Something we can be proud of, in the dozing domain, is our mastering the art of NOT letting him share a bed with us. I mean, there is barely enough room for the Husband on some nights (so I am told) so if there was a third person thrown into the mix, I can forsee some rather sleepless night – for the adults anyway. Harrison stretches out luxuriously – and usually diagonally – to sleep, so you can imagine how little space would be left for two other occupying adults. And then there is the small matter of him being a sweaty betty sleeper…

Sure, morning cuddles are one thing, and I’d LOVE an opportunity for him to snuggle and sleep on my lap if it was only for a nap. But safety wise, I’ve never seen it as a good siuation and you eventually end up creating a rod for your own back. Of course a baby will get used to it and demand it over and over again. Then you not only end up with a child who wont sleep, but also one who wont go anywhere near his own bed – double trouble that I do not need!

And again it comes full circle that he’d just much prefer to be in his own bed and relish his own personal space than occupy all of ours. Let him be the king of his castle, and most importantly, let there be sleep!!!