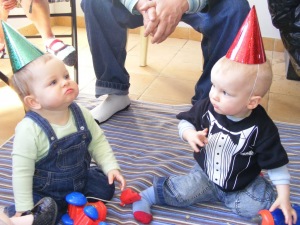 Our little Harrison enjoyed another First yesterday. His first “first” you could even say… Well, to be precise it was his first little friend’s first birthday party. Little Kylenn Farquarson clocked over on the calendar to turn the big 1!

True to form, the feeding machine that is my son soon gobbled up many of the kiddie culinary delights on offer – including many of the chips either discarded by the birthday boy on to the mat below. Not fussy at all, it would seem, whether its served up on a plate or purely discovered on the floor! And amazingly, although he consumed a sickly amount of sugar filled treats (as is to be expected at a first birthday party!) he came home and slept so soundly! Who said sweets are the root of all evil and send kids hyperactive??? Perhaps he is the just the exception to the rule then…

Kylenn, the birthday boy, is the elder statesman of the two boys; by three days to be exact. And he has been one of Harrison’s little best buds since they have been about 3 weeks old when his Mummy, Dinielle, and I stumbled upon each other in Mum’s Group (or Mum’s Group Therapy, as I liked to call it!) both still sporting the exact mental and emotional scars from an identically traumatic labour. And what’s more, as we found out that same day, we lived in the same street, separated only by two blocks of units.

The boys have thrived together, along with their other little friends, and its so hard to believe they are all turning one! Watching them play with another little mate, Xavier, some three weeks younger but so much more mobile on his legs, you couldn’t help but wonder, where have all the days, weeks, months of fears, tears and of course cheers, gone??? But, we are all older, wiser – and tireder – 365 days on, and, I am sure we could all agree, relishing this next phase of life as our bubs blossom from babies to toddlers. Bring on the fun of the next 12 months!

« The Best of Times, The Worst of Times
Injection Rejection… »