In 2007 Oprah introduced to the world the affable, articulate Randy Pausch, a professor at Carnegie Mellon University, who gave one of the most profound speeches I have ever heard on life and chasing your dreams. You see, this was a man who knew a thing or two about setbacks in achieving his ultimate goals but instead of seeing stumbling blocks, he saw an opportunity to show the universe just how badly he wanted success: “The brick walls are not there to keep us out; the brick walls are there to give us a chance to show how badly we want something.”

Anyone with a burning pit of passion inside them will have come up against one or more of these metaphorical brick walls.  And, if you are anything like me, it can certainly feel at times as if you’re only banging your head against them instead of making headway in sending them crashing down. But in this Oprah Winfrey Show episode it became clear why we should never give in and give up on our dreams.

“Experience is what you get when you don’t get what you want,” Randy Pausch declares, reminding us that every encounter (good or bad) on our road to realising our dreams is a lesson. So next time you think yours has been thwarted, remember it’s just a test to see how bad you want it. There truly is no such thing as failure – as Randy articulates perfectly, it’s all merely practice.

P.S Stay tuned later in these Oprah Lesson series as I am going to talk about why this man is also one of all-time favourite guests 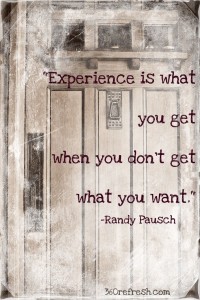 « Lesson 22: My favourite Oprah-ism – “You become what you believe”
Oprah Lesson 20: “Luck is preparation meeting opportunity”. »