It was while watching Oprah interview arguably the world’s most successful author, JK Rowling, that I experienced one absolutely mind-blowing A-HA moment.

Listening to her June 2008 Harvard Commencement Speech, Rowling shared what I consider to be her most powerful words of wisdom:

“It is impossible to live without failing at something, unless you live so cautiously that you might as well not have lived at all”.  She reveals, “My greatest fear had been realised – and I was still alive”.  You see, the woman christened Joanne Rowling, faced rejection 12 times with her wonderful tale of wizardry.  But thirteen soon proved a lucky number and Harry Potter was to be in print.   Now, 400 million books sales later, translated into 69 languages in 200 countries, the final book in the series has the auspicious honour as the fastest selling book of all time.

Rowling is, as Oprah announces, “the first self made billionaire author in history”, who went from utter obscurity, living in borderline poverty, and dealing with clinical depression and life as a single mother; a time where she acknowledges she was “barely hanging by a thread”, to being hailed as “the Queen of the Publishing World”.  She can now lay claim to an enormously successful literary empire, the likes of which has been responsible for reignited a passion for reading, an imagination, amongst the world’s youth.  Indeed, its no stretch to proclaim that one-day, every child in the world will know the name Harry Potter.

Jo, who was requested to make her pen name the initials JK, so as to also appeal to the male readership market, was, surprisingly, like many wannabe writers, also one to suffer attacks of self doubt.  She acknowledges being a writer was “all [she] ever wanted to be” – deep down she knew there was the undeniable fact that she could tell a story – it was just a small process of finding the right tale to tell.  And when she did discover it, aboard a train en route from Manchester to London, the floodgates opened.  “It was the thing I was meant to write”, she recounts with a sincere simplicity, even though she admits writing for children was never something she had given much thought to.

Thanks to Oprah and JK Rowling I can confidently say I’m no longer living “in a straightjacket of my own making”. Failure can actually be a beautiful, blessed thing, because it makes the reward, when it finally comes (as long as you have the self belief and resolve), all the more worthwhile. 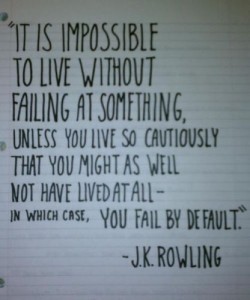 « Lesson 24: how Oprah has made me a better mother
Lesson 22: My favourite Oprah-ism – “You become what you believe” »