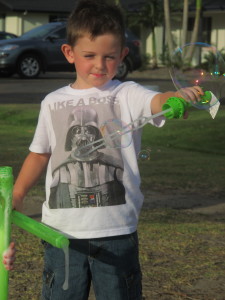 The clouds above had been heavy all day, and a downpour seemed imminent. Likewise, I felt a raincloud above me ready to burst. Blinking away the sudden tears that threatened, I swallowed the lump in my throat and walked through the school gates for the last time this year.

It was hard to explain the myriad of emotions surging through me, each vying for supremacy at the forefront of my mind. There was joy that we’d found some fabulous new friends in this environment, relief that we’d made it relatively emotionally unscathed through the first year of school, and pride at how far my shy boy had come since starting at a school where he knew not a soul.

I think that’s why everything I was feeling became so magnified. It dawned on me that just like his first day of school all those months before, so too has this last day of his first year proved to be a milestone worth celebrating. Together we’ve learned so much, especially that my son is actually far more resilient than I gave him credit for. He’s had to endure so much change (new house, a switch in teachers – twice – and having to make a completely new set of friends) but has come out the other side stronger for it. I’ve discovered he has a love of learning in maths and science (and obviously does not take after me!) and prefers quality over quantity when it comes to friends.

For me, I’ve learned that I will speak up when I believe the school has made a mistake. That you can never have enough food in the house to get through a week of packed lunches. I’ve also come to understand there will be times when his little heart will be broken by fickleness of friendships but that it’s usually all resolved by the next day (boys do conflict resolution so well, don’t they?). And I as well know that there will never ever be enough hours between drop off and pick up to get done everything I plan to do in a day!

Phase 1, Prep, is now done and dusted. Onwards to Grade 1 we will go, both all the more wiser in many ways.

« Essential Baby: I had a ‘good baby’ but still suffered from post natal depression
In 2015 the best is yet to come »