Week 1 is now done, and I’m feeling just as weary as my son.  It’s been an undertaking of a new education process for us all and lots of lessons have already been learned along the way. Here’s the main things for me that have opened my eyes as a first time School Mum.

Suddenly my days have shrunk
I’ve heard many parents of school age children who’ve gone before me lament that the school day is over just as quick as it began and now I see for myself why. Because suddenly the day seems to have shrunk with my windows of opportunity to get things done drastically reduced. Working around Master H’s school time’s and Lady Z’s sleep times does not equal much spare time to work from home, run errands, or clean a house. Especially when you have a 11 month old who has a sense of adventure that would make Bear Grylls envious and needs to be shadowed constantly in her waking hours. Will I ever get anything done again?

If you have a baby, you can forget about maintaining their routine
For the first 11 months of Zara’s life, Harrison had to work around her routine. Now, it is she who suddenly has to fit into his strict schedule. It’s hard to squeeze both the naps she needs into such a tight window. Morning naps unfortunately can start a bit later but afternoon sleeps cannot. There’s no longer letting her languish late into the day if she’s had to be put to bed later than usual after lunchtime. I’ve had to swoop in and scoop up a sleeping baby from her cot on more than one occasion. And I pay like hell for it between 4.30 – 5.30pm.

I suddenly see why living within walking distance to a school is attractive
Why? Because you might have to park just as far as your driveway when you need to collect them again in the afternoon. I thought I was leaving with ample time up my sleeve to pick up my son but no, I’m still parking half a mile away and walking back. What on earth do these other parent’s do to be able to secure these seemingly super rare carparks? Or do they just never leave, preferring instead to congregate at the school gate all day with their takeaway coffees, immersed in conversation about the pros and cons of the school teacher their child was allocated?

Reality Bites for us both
As I surveyed the classroom upon drop off on Friday morn, it hit me I was the only parent still there playing with their child and trying to settle him in. As is his way, he was anxious for me to stay, still not quite comfortable in these new surroundings and unfamiliar faces. I noticed was getting looks from the Teacher and Teacher’s Aide which seemed to say “time for you to leave”.

That’s when I knew we weren’t in Kansas anymore, Toto. We’ve entered the Big League with Big School. Daycare and preschool was the minors, the reserve grade of what’s to come. And when you’ve come of age, along with it comes less sympathy for a crying child starting school by the end of week 1. Reality is going to bite come Monday when I’m forced to dole out some tough love and say goodbye at the school door!

I didn’t expect to feel so sad
It was something I secretly thought I was looking forward to – 5 days a week my son, who loathes playing by himself and wants my constant attention, would have an endless supply of stimulus and a social setting in which to thrive. But as I spied a mother and son sitting in a café, sharing a steaming hot bowl of fat golden hot chips at 11am on a Thursday, I felt an unexpected pang. No longer could my boy and I treat ourselves to such a small luxury on any given day of the working week. I was suddenly sad the spontaneous days of being young and carefree had now already ended for him. It dawned on me we’ve arrived at the start of responsibility in his world, and I wondered how on earth the years could have sped by so fast to this moment already…

At the end of week 1, I’m just as exhausted as my son
Yes, our children are the ones who are being thrown into an unknown world with new rules, new expectations – and in Master H’s case many new faces – but donning the role of “school mum” represents a new phase in my life as well, and it is taking just as big emotionally tiring toll on me too.

There’s no more scheduling in a quieter day mid-week to recover from a big few days of preschool or work, or lazier starts some day where pj’s are donned til at least 10am. Nope, we have to be dressed to impress, with bags packed and lunches made and out the door by 8.20am and all prepared to drop everything come 2.30pm to collect him.

Then there’s the mental toll which can leave you just as exhausted. You need to be on time to drop off, on time to collect. You need to be on top of the food supply in your house so lunchboxes can be made (every day – mundane yet exhausting!) and ensuring the sparse number of uniforms you bought (that you assumed would be enough) are constantly being cleaned so there is a fresh one waiting each day. An because we’ve experienced so many mammoth changes in our lives of late, its making us all a bit more drained than normal.We’ve been bouncing from new rhythm to new rhythm and hopefully soon enough we will settle into the school one. 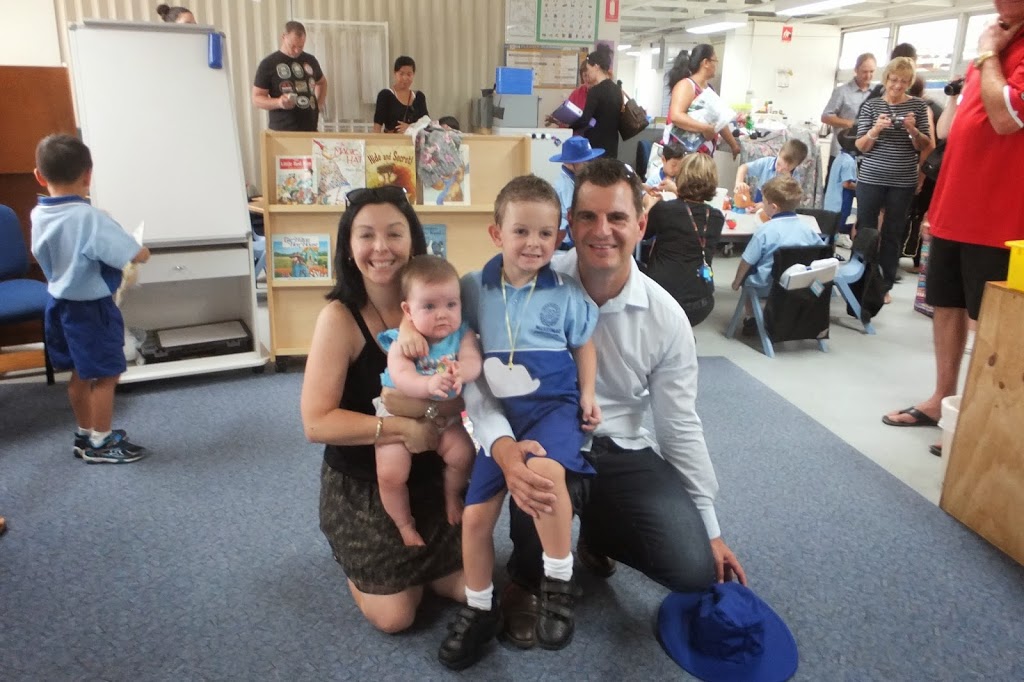 I know we will eventually find our groove, and the weariness will abate. But it is safe to say that Harrison isn’t the only one learning many new lessons. And I know as week 2 looms large, there will undoubtedly lots more educating ahead for everyone.