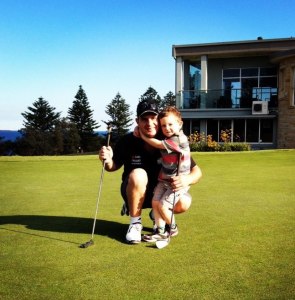 Fact: Since becoming a mum I have never woken to the sounds of complete, golden silence – nor even spent an entire 24 hours utterly home alone.

I vaguely remembered the vestiges of such a luxurious activity from my pre parenthood days; where stillness seeps into every corner of your home and no little hands try and yank you from your slumber before the sun has even broken through the night sky. Where you can languidly stretch out your days to a pace that suits, and the only schedule that exists is the selfish one, that does not include wiping bums, dishing out snacks, or being forced to kick a soccer ball about the backyard.

From what I recalled, it was some sort of bliss…

So the Husband came up with a novel suggestion a few weeks back in an attempt to help his heavily pregnant wife who had been battling with sickness and fatigue and proposed the following: a boys weekend for he and our 4 year old son so that I could have one last shot at rejuvenating myself before my life takes on it’s busiest slant yet.

Naturally, there was part of me that did Toyota star jumps at the thought of 24 hours to myself in the comfort of my own home, but being 35 weeks pregnant, it not only put an end to such physical activity, but of course also made me think about whether it would actually be a good idea to be left all alone at such a stage. So, a compromise was struck and off they went for their boys weekend – a whole 20 minutes from home.

Even though my plan to use up our reward points from a certain mega player in the business world (I wont divulge who as I am currently fighting them for reimbursement and shant jeopardise my chances – yet!) was thwarted, the weather was disastrous (well for those that wanted to be outdoors) and the 4.5 star resort apparently left a lot to be desired, it did not dampen their enthusiasm. Both of the beautiful boys in my life had themselves a time that they will treasure, a time that was solely for the two of them to carve out magical memories that matter only to they.  Even the simple fact The Husband suggested the special activity so that he could do something that would be a precious token of the bond he and his boy share, and to go to such an effort so that I could literally put in none for a weekend, was heart melting stuff.

And considering life is about to change in a huge way for this family, and my little man spends most of his weekdays craving Daddy-time, it was a perfect way that they could cement their own unique bond before the new baby comes along and The Husband’s world gets swallowed by the enormity of his job.

It may have been a boy’s weekend but we were all winners in this instance. For even though the heavily pregnant home alone wife did not get to sneak away to some fabulous destination, it was the thought of being ensconced in the sanctuary of her silent home, with only her book and DVD’s for company (and under strict instructions NOT to do any chores) who was still in bed come 10am Sunday morning when the travellers made their return home who also felt like she’d had a brilliant weekend escape. For she savoured every moment of solitude, as if it was a bounteous bottle of magic elixir, knowing it would be her last for some time to come.