It’s almost 2 years since my Dad rediscovered his passion for all things motorcycle and treated himself to a brand spanking beauty of a bike.  It’s therefore almost been 2 years that I subconsciously started holding my breath, praying we wouldn’t ever get a phone call like last night’s.

It could be far, far worse, I know. I cant even bring myself to think too much of how bad it might have been because as well as there being no point putting myself through such torture, the thought of early labour doesn’t entice either!  Instead I have spent the day focussed on counting my blessings, every chance I get sending a silent prayer of thanks high above to his guardian angel who saw to it Dad would get up and limp away with only bruises and scratches to show for such a scary moment in time.

Sure, his beloved bike and all his protective gear (and THANK GOD he was wearing it all – it now lives up to its reputation for saving lives!) haven’t fared nearly so well but the beauty of that is they are replaceable. He is not.

I know I cant expect him to simply give up something that is his passion, his only pastime that can be just for him. He has worked long and hard his entire life and rarely had time for hobbies.  This bike has been a belated interest that brings such joy and I know he wont sell this prized possession of his.

We made a deal though; it was the best we could compromise with, considering.  He wont ride again until after his next grandchild is born. I can feel threads of anxiety already weaving their way into my mind as the end of this pregnancy nears, and I dont want one of them being worried this could happen again. Sure, life is a fragile thing and anything can happen at any moment, I understand that too well. I just cant help but feel this near miss was some sort of warning, so I’m making him at least agree he wont tempt fate a second time  too soon. 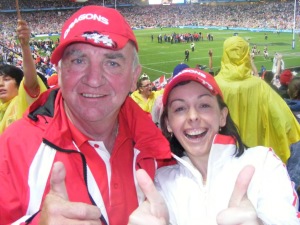 For now though, I just continue to count my blessings, to reflect and be so thankful it didnt end as badly as it damn well could have.  My mum still has a husband, my siblings and I still have a Dad we adore, my son and my nephews still have their beloved Poppy and my unborn child still has the chance to meet one of the men I admire most in this world. Whoever it was watching over him, know that you have my eternal gratitude for the fact my father is still with us today.

« Unveiling my Vision Board (& giveaway!)
The plan is… there IS NO PLAN »