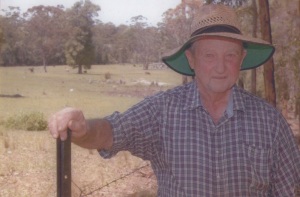 Somehow 7 years have passed since we had to say goodbye to this man – my beloved Pop – so today I’m sharing something I wrote for him while he was battling cancer, and cranky at the “inconvenience” that came with being stuck in a hospital bed. For someone who needed the outdoors like the flowers craved sunshine to thrive, it was no easy feat…

Propped up in his hospital bed, rugged memories of a challenging life etched into his flesh, sits my Pop, his face belying the pain he must feel. Twinkling eyes, the colour of a cloudless spectacular Spring Morn sparkled mischievously at me as yet another tale spills from the unlocked vault that is his memory. Once more I nestle into the chair beside him and listen in quiet awe to the man who is the pillar of humble clan. He is battered and bruised from this fight, but not yet broken.

His tenacity amazes me, living a life that has tossed many hurdles his way. As fierce a fighter as any brave young man, my Pop had picked his way through each and every engagement of warfare with a dogged determination to always win in the end. And now for my Pop there is a new battle he faces – or perhaps more aptly, the revisiting of an old enemy. Cancer.

Mostly I suspect the wars Pop wages with the confrontations of life is an unconscious duel; like a sword drawn from within he seizes upon a strength that can only come from living a life such as his. And with each dawn of a new day that he faces from this hospital bed seems to come a new encounter. Many would surrender, but with iron clad courage my Pop stays strong. Slowly he feels he is inching closer to the freedom of being back on his beloved Farm, so he continues to fight, as only the strong and proud do best.

He takes a break from these battles, each day that my sister and I call on him to keep him company. By his bed-side, he unfurls amazing accounts of his life to us, none that we could ever have presumed to know. And with each tale told, my awe for this enigmatic man blossoms further. Not many of us would survive if we’d have walked a mile or two in his shoes.

To live in a world of turmoil, through the darkest days of The Great Depression and World War 2, to raise a family of ten children in the face of such adversity, when money is scarce and luck be not on your side; to toil relentlessly for every penny, definitely no stranger to a long hard day’s work so you could scrape by to provide for your family; and harshest of all, to endure every parent’s worst nightmare, experiencing the death of a beloved child – not once, not twice, but 3 times over is as cruel a fate as any could bear. Yet through it all my Pop remained strong and fought on.

With an almost nonchalant shrug of his shoulder and a shy nod of his head, he largely waves away any praise. Quite simply, to him and was just doing what had to be done. No fuss necessary.

He tells us the jewel of his mother’s wisdom, a simple lesson that has carried him all through life:“I couldn’t afford to give you much,” she said, “but I could teach you the difference between right and wrong”. I sensed that was why he never stopping fighting so hard against this Cancer “inconvenience” – quitting would just be wrong.

Pop, you are a treasure of time gone by, an icon to those of us who adore you. You were brash, no nonsense, and infused with a steely will of determination that we could all benefit from. We’ve been so blessed to have you as constant in our lives, and are so lucky have grown up in the shadows of you and Nan (“the prettiest little thing you ever did see” 60 odd years before). Thank you eternally for bequeathing to me a knowledge learned in the classroom of the real world and for weaving a golden thread of strength through my life.