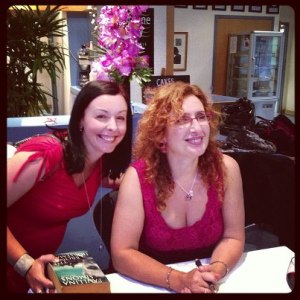 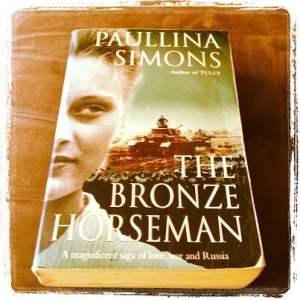 Everyone has that one book that is their benchmark. It is the story that stays with them long after the last page has been (sadly) read, where the characters morph into seemingly real life mates and your hang off their every word, every action, as if you have sewn yourself into the fabric of their world.

For me, that treasured tome was The Bronze Horseman, by the incomparable Paullina Simons; a novel that has the honour of being my number one, all-time greatest read.

So you can imagine my sheer delight when I was walking at snails pace past my local Dymocks 3 weeks ago, willing my 4 year old son to keep the pace I was setting, when a sign caught my eye. There is was in big bold caps, a huge printout adorning the shop-front, announcing “MEET PAULLINA SIMONS”.

I think I may have screamed a little out loud (instead of undertaking the proper response and doing it silently inside my head), resulting in a few grave looks from my fellow shoppers as they gave me a wide berth walking past.

In that moment all of my Paullina Simons reading related memories came gushing back to me. Reading her first ever novel Tully, while I was in my final year of high school, and being mesmerised by the pure talent that was present in this provocative prose. From then I devoured Eleven Hours and Red Leaves before finally unwrapping my Christmas present of December 2001; it was a copy of her latest offering The Bronze Horseman, a deliciously thick book that I tucked away, awaiting a treasured time that I could lose myself within its pages. Because each time I picked up one of her books I lost a little of my life. All I could concentrate on was what was unfurling from inside the story – real life be damned!

Finally the silky stretch of free time I’d been waiting for arrived. Boarding a train in Naples (and being promptly ripped off by a duo of slippery Italians whom I’d innocently thought were graciously wanting to help me with my bags and show me to my seat – turned out they wanted a fiscal reward in lieu of a simple thank you!) I settled in for the sojourn that would see me snake my way down the spectacular Italian Coastline towards Sicily.

Many (lost) hours later – with a full tummy thanks to the elderly women in my carriage who insisted on feeding me as we traversed the Italian countryside that I was largely ignoring – I was forced to come up for air. Calabria was now behind us and we were crossing the Strait of Messina, and my stop was soon upon me. It literally pained me to have to close the book and depart from my Bronze Horseman bubble.

Later that night, after being reunited with my friends from London, I stole away to bed early, feigning exhaustion from a long day’s travel. Secretly, I was suffering withdrawals from the life of Tatiana and Alexander and promptly lost myself in the pages of the book once more, right until the very last paragraph had been devoured.

I think then that I might just have had a little cry that it was all over far too soon.

That book then became a boomerang, ricocheting between each of my fellow female travellers, and we all became as equally enamoured with it. The main characters, Tatiana & Alexander, morphed into invisible travel companions, trailing us around Sicily, up to the picturesque Amalfi Coast and all the way back to drizzling London. It was like we had made lifelong friends on this journey who now had secured a permanent place in our hearts.

It’s no surprise then at tonight’s event I was a gushing, giddy fan who hung off Paullina Simon’s every word as if it was ingrained with gold. My hand shot up to ask the first question when the floor was open for Q &A’s and I even managed to sneak in another (causing her to ask me if I was with the press!) before she closed off for the night.

It should equally have been no shock that 2 complete strangers came up to me as I waited keenly in the queue to have my beloved book autographed, commenting separately how lovely it was to see my apparently palpable adoration for this uber talented author. Seems my body language and my eagerness to interact were a giveaway that a mega fan was in the house! As I told them, it’s not everyday you get the chance to be in such close proximity with someone you have revered for 16 years, I’d have been kicking myself if I had not made the most of my chance to be in her presence! I am so pleased that Paullina Simons did not disappoint. Much like when I was swept away within the world she created for The Bronze Horseman, on this night I too lost all essence of time as she spoke.

Happily, as I walked away clutching my precious (battered) copy of The Bronze Horseman, as well as her latest offering, Children of Liberty, both of which now bore her penmanship inside, I reflected on the thrill of an evening spent with Paullina Simons.  Not only was I impatiently ecstatic at the suspense she has built for her next book and the idea she has simmering away for the one after that (hint, some familiar faces will reappear, oh the joy!) but I departed all the more enlightened, enamoured and inspired for my own writing journey as well.

I thank you Paullina Simons both for the motivation and captivation of tonight’s event and  for allowing me to spend 16 years suspended in your wonderful word-filled world!