“In 2012, some days you will have your sword held high and others you will be cowering behind your shield. This represents your battle with trying to achieve your dream. You’ll feel on a roll and invincible, before being crippled by setbacks.”


So said a renowned clairvoyant to me, circa April 2011. And she could not have been more correct about this (at times vicious) cycle of life I’ve found myself in.

Because yes, 2012 HAS been about trying to achieve some of my writing dreams and while there have been some lovely successes they are also tempered by the (inevitable, but still stinging) rejections. Or worse: when you are met by those resounding walls of silence some Editors construct around them when unknown freelancers come a’knockin.  Both have joined forces to slowly deflated the big shiny dream I’ve been nurturing in my heart for the last 15 odd years and it makes me wonder at times why I am drawing my sword at all.

Then I remind myself it’s par for the course in this industry; I’m not the only one playing this literary game of snakes and ladders. But on the darkest days where self-doubt eats away at me like a cancer, sometimes I find myself secretly wishing I was one of those people who didn’t dare to dream, who never harboured some longed for career desire. Because then it would be easy to simply glide along in life, without fear of the impediment of failure.

But over an impromptu dinner conversation with my husband the other night, in between demanding the 4 year old eat his broccoli and stop using the table as his personal napkin, he began to make me see sense (again! Damn he is good like that!).

“You are trying to crack into one of the most populated professions” he told me, “ and without formal experience, without a university degree. Yet look what you have already achieved without them! You should be so proud!”

His tone was firm, his message was clear as he wrapped up his millionth  pep talk to me. “If you can go to bed at night thinking you gave it your all then that is not failure. And besides, isnt it worse not to have tried and be always wondering?”

Wise one, that man I married…

Freelancing, it is a tough industry to be part of when you are prone to second guessing your ability to be a success. I’m a personal work in progress on that front, one I’ll probably always trying to tackle and overcome. But then I remember this amazing quote I stumbled across the other week and I am focused on thinking it every time the seeds of self doubt threaten to take a strangle hold in my fertile mind.

Most of all, I’ll keep chipping away at that brick wall. Because the feeling I get when I see something like the below come to fruition makes it ALL worthwhile. 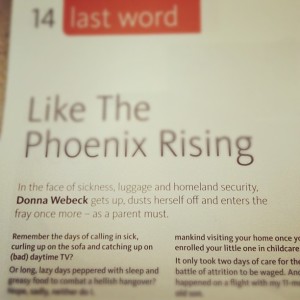