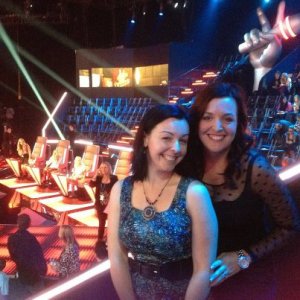 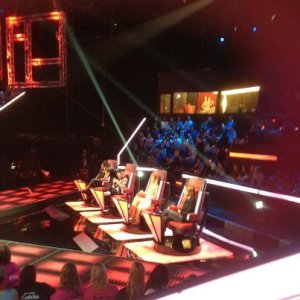 If you and I share social media circles, then it is no secret I am a HUGE “The Voice” fan! So you can imagine my delight when I was offered the opportunity to attend a live show on Monday night, complete with the red carpet VIP treatment!

Here’s a little highlight recap of this fabulous, full on night of fun:

The Judges
The energy that these four consummate performers bring to the stage is not only electrifying but also supremely nurturing. They truly do have not only the contestants best interests at heart but also the fans. During Ad breaks it was not uncommon for them to interact with the crowd, Delta and Keith especially going to great lengths to meet and greet eager fans, and always apparently happy to stop and chat.

There is no denying each has a dynamic presence: Seal is larger than life, tall, well built and oozes charm off camera as he does on it; Joel is like a pocket rocket, bursting with energy and charisma, just as much as you would expect a true rockstar of his calibre should. Delta is simply divine, there is no other word for it. I’ve never understood how this once darling of ours could have coped such unwarranted criticism and if you saw the way she happily engaged with the public on Monday night you’d likely think twice before blurting out anything other than praise for this music princess.

And finally, Keith – swoon! He has a humble swagger and a persona that just radiates warmth. His mother in law, Mrs Kidman was in the audience as well and we all melted a little more when he went straight to hug her upon his arrival! 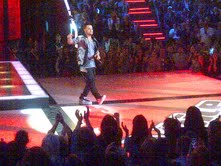 The Performers
By far the most consummate performer of the series for me has been Darren Percival and thankfully he did not disappoint on Monday night. He has such a radiance about him, emanating joy and appreciation in all he does that you cannot help but be captivated by him. That and the small fact this man can raise a roof! The crowd sure saved its loudest cheers for this star! 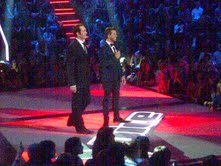 I was also drawn in by Diana Rouvas enchanting performance, Adam Martin has a voice as smooth as velvet and Sarah DeBono and Ben Hazelwood were other outstanding performances on the night. I’ll continue to remain divided by the chameleon that is Laykn Heperi though. There is no denying that he is easy on the eye (even more so in person!) and while I could listen to him sing “Jet Plane” on constant rotation, there seems to be limited material for him to nail.

A special mention should also go to audience “curator” (for want of a better word!) Michael Pope – this is one funny man who knows how to keep a crown entertained during the lead up to the show and in the ad breaks. Many laugh out loud moments came from this behind the scenes guru!

Being able to witness live the group performances from Team Joel and Team Keith was an epic thrill. Joel is a born entertainer – his stage presence has no equal! Keith and co just lured you in like a good ol country song should do. I got swept up in the moment in both pieces and should probably hope the camera didn’t catch me screaming and singing along in utter excitement – it may not have been my most flattering look…

The Company
What made an amazing night even more special was being able to share this night with some fab people. The chance to catch up with two people I sadly get to see rarely these days, as well as sharing this event with my gorgeous big sister was bliss. The hugest thanks goes to Brett for providing the VIP tickets – which saw us with seats so damn close to those glorious big red chairs I damn near hyperventilated with glee!

Finally, love or loathe this type of show, I hope you will agree that there is so much that should be applauded about The Voice.  Not only is it responsible for unearthing some seriously brilliant musical talent in Australia, but I adore most that it is all carried out in the right spirit, with none of the snark you can see in other similar shows both now and in the past. The mentors (LOVE that they are not labelled Judges) perfectly combine a nurturing environment with a constructive arena for stars to flourish under. There really is a lot of love in the room and it carries forth through to the audience. 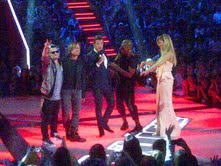 A night at “The Voice” most definitely does not disappoint. If you are anything like me I guarantee you will leave the Live Show you feeling pumped full of adrenaline, admiration and adoration and singing the whole way home!