Source: quote-book.tumblr.com via Kim on Pinterest
Have you ever felt so consumed by something that both exhilarates and alarms you in equal parts? Are you ever driven by some inexplicable force that sees you risk your well-constructed armour against failure all because there is an energy compelling you to throw everything you have at that one dream that you so desperately want to achieve?

If you know of this fine line between pleasure and pain, then you, just like me, have discovered “joyfear”.

I stumbled across this very astute (and oh so apt) mantra when reading a piece by Krissy Brady (writers, do yourself a favour and read full post here) and was immediately struck by how this notion summed up perfectly the flux state of my being of late. I’d been riding a roller coaster range of emotions, having had my flame for fiction writing reignited, but at the same time dueling against a gnawing trepidation of rejection.

And even though the cloud of possible failure did not dissipate, I continued to feel compelled to write, even in the face of it.  Normally I’d succumb to the dread that is interwoven with anything that is associated with risk, but this past week I spurned it’s tempting advances and continued typing.

Leo Babauta, who gets the full cred for coining this clever term, explains this phenomenon in greater detail:

Joyfear is a mixture of intense joy and intense fear into one ball of powerful emotions that both lift me up and make me see things clearly when I hadn’t before. Having only joy is great. Having only fear sucks. But having both… that’s life-defining. Do not shy away from Joyfear. Seek it out. Recognize it when you happen upon it. Joyfear will change your life, and you’ll never forget the moment you find it.
Scary as it is to acknowledge out loud that I am legitimately working to pursue a dream, I have decided to feel the fear and do it anyway. Sure, I could be possibly setting myself up for some self imposed humiliation if I don’t achieve any success and will always find it hard to talk openly about my fiction writing as its always been a part of my writing world I kept closely guarded. But the flipside is I am also setting myself up for accountability; something I’ve been loathe to do in the past. You see, its easier to call it quits that way… But now the universe – and anyone else who cares – has full permission to kick my butt if I dare give in.

So this is me actively – and very publicly – embracing the notion of joyfear. Long may this creative force reign supreme…
Proud to be linking up with the Kidspot/Maxabella inspired Grateful Project 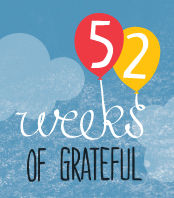