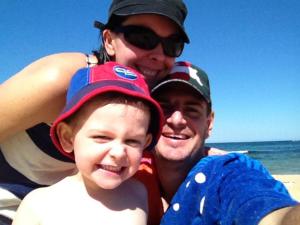 There is a milestone of sorts happening in my world this week; one I am both celebrating and commiserating.

Tomorrow will mark 12 months since I ceased permanent employment, stepping aside so that my husband could tackle (almost literally!) his dream job.

Congratulations to The Husband are definitely due. Without a word of a lie, this man has worked almost round the clock, week in and week out during a long footy season (and even beyond into the off season!) to ensure that he gives 110% to his job. Through early starts, impossibly long 16hour plus days at times, much time away from his family and working weekends he has never complained. He merely gets in and gets the job done, no matter what it takes.

It’s his passion and I think it shows in every page of his publication. And even though I do moan about his absences and hefty commitments, I am every inch the proud wife.

The flipside (as well as having had to get used to do so much solo parenting) is that 1 year on I’m still yet to be “gainfully” employed again. I never assumed that would be the case when I tearfully waved goodbye to a 6-year chapter of my life. Armed with what I assumed was a worthy CV, kick ass references, and a healthy dose of optimism, I was both sad to leave behind a company, colleagues and boss that were the most amazing people to work with, yet was also ready to embraced the change. 4 hours commuting had taken its toll and there was just no way we could juggle the demands of both needing to make the long treks to and from the Coast to the City, especially when there was a young child to consider.

However living in a relatively small place, coupled with a teetering economy, it has been much tougher than anticipated. It’s left me at times to really struggle with the rejection factor, but also at the same time see I’ve been extremely blessed.

If I’d had found a job I’d also have missed out on so much that has come my way this past year. Sure, the pressure it would take off the bank balance would be welcome, but we have survived. In fact, through this little experience I figure I could now give Mr Swan a run for his money when it comes to drawing up tough budgets!

I’d have missed out on a fantastic opportunity to obtain some new skills by managing a large project from my former company for 3 months at the end of last year, which was both mentally challenging and extremely rewarding.

My blog has been nourished with extra attention and have brought me some fabulous opportunities that never before had come my way, all thanks to having extra time to dedicate to it. I had never previously had a proper chance to do just that so it has been heartening to see the fruits of my labour on that front.

Another of the things I’d added to my “don’t have the time” life list was tackling the freelance writing arena. After many crises of confidence (rejections will do that to a girl who is starting out with sensitive skin in this tough game) I’m proud to have seen my name in print 5 times, with another due next month, as well as quite a few online articles published. And while it remains a very long rocky road to make any headway (especially in these economic times where so much is done in house instead of outsourced) I am beyond thrilled with my achievements thus far!

Most exciting of all for me however has been rediscovering my love of fiction writing. I’d unearthed the voice I feared so long ago had been forgotten and it simply makes me feel ALIVE when I lose myself in my own world of fiction. I’m more determined than even to see this little project come to fruition. Sure, I know the publishing world is even more fraught with knock backs than the freelance writing one, but there may never be such a golden opportunity of time like the present to try.

So even if it has been one year of watching closely every single dollar and cent spent, I’ve used my time wisely – there’s been no lazing about on my bum watching endless daytime TV or sunning myself with a good book (I wish!). I hope throughout this journey I have also become a better wife and mother (though sadly not so much a good cook still…) and am proud to have unearthed wells of independence I never knew existed within me. Even though 12 months on I’m reluctant to fully to sever the connection with my old company and old colleagues, I do celebrate both our victories, no matter how big or small.

And because I subscribe to the “everything happens for a reason” theory, I will just continue to do as I have done and take heart that the universe has a plan for me.