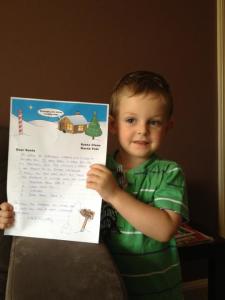 Propped up at the dining table, eyes as shiny as a delicate bauble adorning a Christmas tree, sits the three year old, alongside his Daddy. A shiny sheath of paper and a pen are perched between them; the task at hand is the first ever letter to Santa.

The letter has come about after a particularly trying shopping outing in which I reserved the right to revoke all Christmas privileges from my overly curious, under attentive son who not only almost got lost on many occasions but also sent my blood pressure through the roof with his constant desire to touch every freakin’ thing in every shop we entered.

The Husband (aka the mediator) decided to have a diplomatic chat with the wayward child and state that Santa is always watching, and that they’d best write a letter to the big man and state his case to still be on the “Nice” list, and erased from the “Naughty” one.

After an initial consultation about what the letter should contain, the duo commenced, much like the Defence, outlining the argument as to why one Master Harrison should be entitled to some Christmas gifts. And in the interest of being truthful, (because we all know that jolly big bearded man is omnipotent) it was acknowledged there could be a lot more work done on the listening front and a pledge was made to try harder between now and Christmas to fulfil this often underachieved behaviour. He was told, if he could do that then Santa might see about granting him some Christmas wishes.

This then became the green light for the preschooler to begin reeling off a long list of toy desires. At one point I was quick to interject “This isn’t a shopping list okay? Its something we send to Santa and if you have been a good boy you might get some of them under the Christmas tree”. I was pre-empting my clever kid holding written proof against me on December 25 if all his stated desires weren’t met, as if we’d entered into some sort of binding contract!

Thankfully, the lesson on the spirit of giving began to sink in. He commented that the other boys and girls need gifts as well, which left me relieved that he isn’t under the impression Santa is on his personal payroll. Though that train of thought might have also been handy for him to be aware of two hours earlier when I was diffusing his monumental meltdown in a store when I told him the present I was buying was for his cousin.


After managing to keep the requests to a conservative four, his Daddy asks him if there is anything else he’d like to add before singing off (a closing argument, if you will…)

“Don’t forget to say ‘Merry Christmas’!” he adds enthusiastically, before curling himself into his Daddy’s warm lap like a kitten, and attempting to scrawl his name.

With that, the very first official Letter to Santa has been signed, seal and soon to be delivered… And I have 19 days of leverage in which to play the “You better watch out, you better not cry, you better not pout, I’m telling you why ” card to the best of my parental blackmailing ability!

« The Business of Blogging
You gotta have faith… »