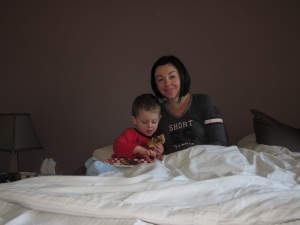 The gang at Sealy Australia have been busy making me earn my keep as the Sleep Ambassador, teaming up last week with the general public, who offered up suggestions for me to road test so that my (and hopefully, ergo, some of your) nocturnal issues can be resolved.

(You’re welcome. Generous to a fault, I know…)

First up – and most likely my most loathed sleep matter – we had to tackle the child waking ridiculously early issue.

Well before the sun decides it time to rise and shine, it’s become a annoying norm to have a little person appear at our bedside anytime from 5am. Even if he hasn’t had a particular restful night’s sleep, Harrison will announce “it’s a lovely day for me!” and decide it’s time we all got the day underway. I’ll concede, maybe he is just a morning person (certainly doesn’t get that from me) but it makes for a long day and it is something we have tried countless ways to fix but as yet with no success.

After many worthwhile suggestions the option chosen to try was to tell Harrison “if you want to get up an hour earlier, then you need to go to bed an hour earlier”.

I’ll admit, I was wary. While I agree it sounded good in theory, as suspected, it was tricky to translate into results.

After a herculean effort required by me to get dinner cooked, him bathed, fed and in bed by 6.30pm he still didn’t drift off to sleep for almost an hour the first night and was still raring to go come 5.15am. The second night saw a similar fate but by the third night he was asleep 15 minutes after lights out. And managed to make it to 5.40am.

Perhaps if he was a bit older it would have worked well but it was hard to retrain his body clock in just a few nights and to get him to grasp the concept of why he was being made to go to bed so early. Though just quietly, the night he was all tucked up and snoozing before 7pm felt like heaven to me!

Second on the testing regime came the requirement for me to work on my own wakefulness issues. My mind has a habit of morphing into a mental gymnastics arena once I lay my head in bed. Thoughts swing like monkeys swooping from vine to vine – more often than not it’s hard to still them and drift off to sleep.

The general public suggestion to counter these issues was something I was mostly already doing. Relax in a scented bubble bath, spray your pillow with lavender and lose yourself in a trashy book before bed.

Ordered to indulge in a bath and read a book? Bring that on I say! Though I ditched the suggested Mills & Boons book and opted from one of my own taste.

The lavender works a treat when it comes to catching some zzzz’s but still found myself experiencing some middle of the night mind aerobics that no about of lavender seemed to halt. And soaking in a bath or getting up to go and read at 2am sounded too much like punishment to me when you are sleeping in such luxury as the Sealy King Size Jubilee Ensemble!

To round out the week, my last task saw me instructed to restrict my Internet and TV time for an hour before lights out.

It’s funny how you never miss something until it’s suddenly unavailable to you. It dawned on me that I must use TV to unwind before bed, which I’d never before realised. Internet – not so much. Though I did feel a slight tug of irritability that I couldn’t check my emails one last time before bed, or leap in for a quick look at the Twitter stream.

Instead I fell happily into the pages of my book and slept soundly. In fact I would go so far as to say I had one of my most restful night’s shut-eye in a long time. Not only did Harrison also sleep through (miracle upon miracles!) but I was bequeathed a heavenly sleep in opportunity – followed up by breakfast in bed.


All in the name of work, naturally. I am, if nothing else, dedicated to the task of being a superb Sleep Ambassador…

And so week one concluded rather restfully. The son was making minor improvements, and I was feeling quite a lot less fatigued than normal. Which was a good thing indeed because of what was waiting for me come Week 2…

Stay tuned for next week’s instalment where I accept sleep challenges from a panel of wellness experts, including a particularly trying task set by the lovely Diminishing Lucy!

In the interim the platform passes to you! Feel free to share what sleep tips you have to counter an early waking child, or still your mind to get a restful night’s sleep… 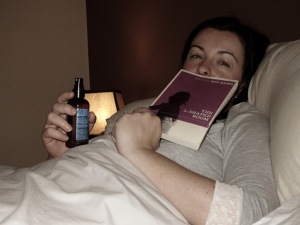 « Is there enough of the PR pie to go around?
Surviving the Sealy Australia Sleep Challenges – Week 2 »