In the fluid subtleties of life, there are always people who flit in and out of our world, perhaps around only for a season, perhaps only for a reason.
But sometimes you can be blessed with someone so special, someone that you have known your entire life, who acts a constant in an ever changing sea of faces.
She is the one I’ve turned to in every crisis I’ve ever had.
She is the reason I was able to break free from the self imposed shackles of my life a decade before, when I followed her lead and took flight from my claustrophobic world.
She is the logic to my disquiet fears, the soother of my concerns.
She is my confidante and nurturer of my self-confidence.
She is the one who stood proudly by my side as I wed my soulmate, and helped hold my hand during the trauma of childbirth.
She is wise.
She is wonderful.
She is my rock.
She is my sister and although its blood that began this bond, it is our lifelong friendship that keeps it sustained.
Sure we had spats as siblings but still there has never been another who had my back quite like her.  She has let me lean on her during the tough times, dried my tears through the heartbreaks of my teenage and early twenties, and has never been afraid to issue me with a well warranted kick in the butt when required too! Once upon a time she also saved me from making what could have been the biggest mistake of my life.
Our early years were coloured with many sparkling highlights of youth, whether dressing up our little brother in dolls clothes, creating imaginary arch enemies to build the numbers in our games (the oh so creatively called “bad boyfriend and bad girlfriend”) or the Christmases when our city cousins would come to stay and play. (Though Sis I could have done without being forced to endure “peg perms” or you wreaking havoc on the hair of my Barbies, while yours stayed perfect and pretty. Just sayin’…)
We eventually swapped pigtails and Barbie dolls for boys, beers and backpacking, partying all over Europe, dancing on any stage we’d find, and setting up a home in London.  Together we’ve seen such wonders of the world as The Eiffel Tower, The Colosseum, stood silently and infused with pride on ANZAC Cove on April 25; we’ve cheered on as the sun set across Santorini, explored the ancient ruins of Turkey and survived almost being arrested on the Turkish boat trip from hell.  We’ve sung songs around a beach campfire in Sicily (“you’re just too good to be true…”) and hosted some crazy house parties at our old haunt Club 39.
During my darkest days, when I lost a dear friend too soon, she dropped everything to be with me and was endlessly patient while I grappled with grief so far from home. We’ve clung to each other during crises, amidst our Dad’s massive health scare, and having to bid farewell to our beautiful grandparents. 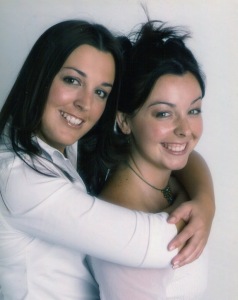 And in the last decade, I witnessed her bring life into the world and she the same for me. I’ve seen her blossom into a beautiful mother as well as a brilliant businesswoman – and quite the awesome wife to her lucky husband G!
Although we don’t get to spend nearly as much time together as we used to, (or as I’d like to!) there is no denying the precious bond we share nor the myriad of mad and magical memories we’ve made over 32 years of being in each other’s worlds.  Happy birthday Shez, yours is a resilience I admire, and a confidence to which I aspire. Sisters by chance, friends by choice.

« Reflections of a first date, 3 years on…
Grateful for celebrations, cupcakes, great cooks and the arrival of long overdue confidence »