As you know, NappyDaze has recently started featuring a column in I-AM Magazine: click here to read or feel free to linger a little here and peruse this month’s offering! 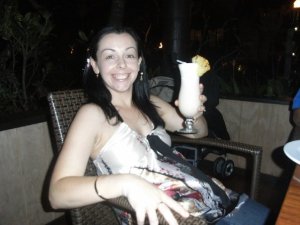 The concept of guilt is something that clutters my consciousness far too often for my liking.

I’ve written about it often in my NappyDaze blog, detailing how my guilt complex rivals the land mass of the Soviet Republic and that it’s been lingering like a poison chalice around my neck long before I joined the parenthood posse. But of course it’s morphed in to a whole new monster since then.  Because it’s no longer all about me – I have a precious little person in my world for which my axis spins.

Whilst I covet any glorious chasms of “me time” that come my way, they are ALWAYS laced with guilt.  It’s as if I have inadvertently trained my conscience to shroud these activities with secrecy, lest it depict me in an unfavourable light; such as an unloving mother who doesn’t want to spend every second of every day side by side with her offspring.

After a recent chat with my friend/ hairdresser (worthy therapists in their own right!) about my son being in in daycare whilst I concentrate on my writing dream, I mentioned I felt like I often had to skulk in and out of the centre, uncomfortably aware that it appeared I was abandoning my child in favour of a day on the couch eating chocolate and watching endless daytime TV.  Yes this was far from the reality but I had myself convinced this was how I was being (unfavourably) viewed.

She pointed out to me “you’ve got to stop feeling so guilty! It’s not like you don’t pay them, and not like you aren’t doing something worthwhile with your time! Plus, Harrison loves it there, doesn’t he?”

Suddenly, it clicked! Yes, he does adore it, I am using this time wisely to forge a new career; and I am paying for the privilege. This sentiment was EXACTLY what I would be advocating to my friends, yet here I was, afraid to take my own advice.

So, here’s to and end of the irrational culpability and remorse we women feel far too often. Let’s do ourselves a collective favour, and vow to go easy on the guilt trips we endure. We are just as entitled to a slice of serenity, whatever shape that may take. Because having a happy parent, who has a sense of self and sanity restored, is ultimately the best present we can give our children.