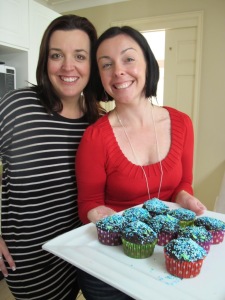 Last week, in Casa de NappyDaze, we had something to celebrate and be grateful for.  And so I broke free of my undomestic Goddess shackles and threw my son a third birthday party – which also equates to a shindig to rejoice in the fact I’ve made it three years down this parenthood path and am still relatively sane.

It was a comment from the lovely Ms Styling You who pointed out it’s as much a milestone for the Mummy and Daddy as it is the child.  It’s a time to cast your mind back to the day all those years before when life as you knew it ceased and your heart expanded to a size that would rival Phar Lap’s.
Lucky for me then we were having a little soirée… And by little I mean 26 adults and 12 children. Cue heart palpitations by culinary challenged me!  But, in the name of following my 2011 mantra of “getting comfortable with being uncomfortable” I forced myself to soldier on and make merry with the party arrangements.  All of which was fine, until it came to the one thing I feared most.  The food. 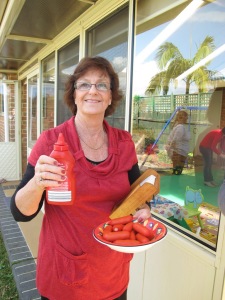 So I did what any undomestic Goddess does in situations such as these – I called in the big guns for cooking favours!
Enter my clever mother in law, the party cooking queen! She slaved away for weeks prior, answering my frantic pleas for help as the realisation dawned on me that I’d bitten off more cake than I could chew.  She graciously cooked and ferried food amongst our many guests – and when she wasn’t doing that she was busy making my invitees all feel at ease or cleaning up the big mess I’d made in the kitchen. Heaven sent, I tell you!
For my baking part (and to appease my conscience that I was somehow contributing to the festive foods on offer), I did proudly produce 24 cupcakes which (thankfully) received resounding praise.  So much so I may be seen to attempt them again in the far off future.  Ok, so they weren’t created completely from scratch but I still had to be in charge of them not burning or crumbling.  And I did painstakingly ice and decorate each and every one. It took me about an hour AT LEAST to perfect their final appearance. 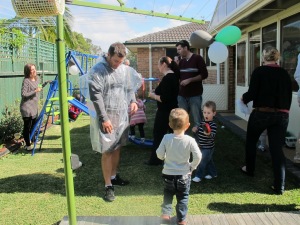 My party piece-de-resistance (besides my smashing cupcakes!) were the “party poncho’s” I lovingly crafted for The Husband and The Uncle to wear.  Fashioned to these clear plastic “garbage bag-esque” wraps, were assortment of fun size chocolates taped to them.  The kids got to race around trying to tackle and throw themselves at the confectionery toting targets with the mission to relieve them of as many sweet treats as they could fit into their little hands!
(And when I say kids I am also including my sister who has a sweet tooth to rival Charlie and his entire Chocolate Factory. She did not miss her opportunity to participate when it became clear her two offspring weren’t going to share their spoils with Mummy)
By day’s end, when my newly three year old Master H was laced in weariness, and we’d farewelled the last of our lovely guests I found myself with a moment to reflect.  Three years before, when I was cradling a newborn, and scared to hell that I’d never know quite how to look after it, I struggled with the notion of foresight.  I couldn’t seem to envisage me at this point, at ease with a little man fast becoming a big boy. And while I still have many clueless days where I wonder if there is some secret parenting book the hospital might just have forgotten to give me upon discharge, I’ve enjoyed an exponential growth in mummy confidence since the earliest days. Who knows, by the time he rolls around to turning five I might even be able to claim that I’ve finally got this parenthood gig under control. And begin to contemplate child number 2.
And while we missed those who couldn’t make it (Nanny & Poppy – oh and your yummy chocolate slice hehe…) I am grateful my boy had a third birthday to remember.  Here’s hoping he thrives on these happy memories for quite a long time as I shall be going into party planning retirement for the next 48 months at least…

« Sisters By Chance, Friends By Choice
Beyonce and her “Baby Reveal” – and the “Once Upon A Time” Disclosure Behind Mine… »