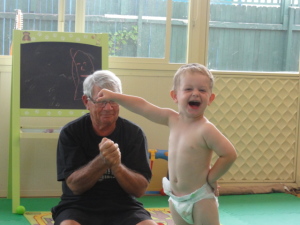 Riddle me this: as a mother (and a female) is it fair to assume I will never understand the unwritten rules and overt desire that relates to little boys and rough play?

You see, I fear my son has started to resemble a Greco Roman wrestler in the playground. He wants to rumble, tackle, grapple anyone within close distance – and I for one am unaware what the boundaries of this sort of rough housing are.

Sure, some of the contenders in the ring as just as keen to show off their kiddie cage fighting skills as my son, and they duel tit for tat, under the guise of Ben 10 and his gang and the gift of imagination. But as parents (and as females) who know better, we always understand it will eventually end in tears.

Like at playgroup last week; it’s all fun and games til someone gets hit in the face with a hula hoop.

Every time I looked up from my social chit chat, there he was again barrelling down with brute force on the next unsuspecting victim. Sometimes his rough and tumble antics were greeted with equal unbridled enthusiasm, other times it was met with many tears (see hula hoop reference above). And as someone who dreads the thought of being labelled the mother of the bratty, bully boy, I was in there in a flash to extradite my overly rambunctious son from both the willing and unwilling participants of rough play and firing off embarrassed apologies every five minutes.

I’ll admit the fact Master H had been cooped up for the 24hrs prior, fighting his croup virus, may have had something to do with the torrent of toddler energy that was unleashed with force. It also may have had something to do with our playgroup were on a field trip to a kids dance class – and he had zero patience (and tolerance) for waiting for his turn in a nice orderly fashion, like many of the older kids around him.

So I ask, was I being a bit of an overly protective helicopter parent, hovering and intercepting at will, or should I have just left it to the kids to blow off steam and fight their own make believe battles? And how does he learn the difference between tough and tumble time with Daddy (which he adores and I loathe) and the lesson we ought not to act like this with any of our unwilling little friends?

Enlighten please, mothers of little men – is this akin to being a typical two year old (though that excuse is about to expire in 4 days…) and that most quite enjoy dabbling in play that to me might appear tempestuous but in their eyes is all part of the rowdy rules of boys being boys? In the wild jungle that is the playground, is it hit or be hit; tackle or be tackled? Because as far as I know as a Mum, it seems to boil down to “apologise or be apologised to” (and I am not sure yet which is the worse of the two categories to be stranded in…).