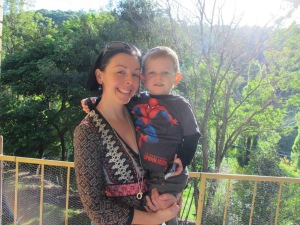 Dorothy sure knew what she was talking about when she clicked those ruby red slippers of hers… Because although I have not lived in the beautiful Middle Boambee Valley in 10 years, it is still the place I will continue to call “Home”.  Having spent the first 19 years of my life ensconced in its tranquil splendour (and, as we fickle youths do, returned for one more 6 month stint 4 years on from that) I was too young – and therefore void of the wisdom to appreciate what we have right before our very eyes – to appreciate the sheer loveliness of this place I grew up in.
My Dad bought this land, 36 acres, back in February 1968, when there were 12 houses in total in this Valley. Almost 45 years on and approximately 2000 people live in its midst. It’s become “the place” to live, with its semi-rural charm, large acreage lots, all nestled in a haven of lush green forestry. Its only 10minutes to beaches, cafes, restaurants, clubs and shops, yet it feels like you live in a rustic, removed paradise.
Nothing beats an early morning walk to get a clear picture of its dazzling, understated beauty.  Dew drops, like glistening diamonds, wink in the early morning sun. A thick blanket of discarded, multihued autumn leaves, like a spectacular deciduous tapestry, fringe the quiet roads.  With nothing but the sounds of your own footsteps slicing through the serenity, as well as the soft chatter of birds, its hard not to become enthralled with Mother Nature’s fine handiwork in this formerly sleepy part of the Coffs Coast.  And as dusk descends, a tangerine sky stretches out above, free from pollution and invasion of tall buildings, like an outstretched set of arms, welcoming you into its fold.  Home.
Distant, yet dazzling, ocean views greet you directly from the front verandah of my parents abode, and a luscious rainforest backdrop curling around from behind, the best of both worlds has descended to this very place.  A dormant volcano looms up from behind, providing the perfectly accessible landmark from air which we quietly acknowledge when flying in. It’s strangely comforting to see.
Middle Boambee is a place too, where traditions are still upheld. My parents, and their elder neighbours who live just below the crest, still partake in an old fashioned act of “showing off their new car”. As Ken points out, 50 years ago, purchasing an automobile was a “big deal”, and the whole neighbourhood would gather to inspect and congratulate you on such an accomplishment.  Now, he acknowledges ruefully, it’s yet another everyday event that is void of ceremony.  And its quaint old fashioned intricacies like this that enhances its charm.  It makes me yearn for my son to grow up in such a rich and rewarding environment of respect.
Of course, if history is anything to go by, it will take him decades to understand its enchanting and unique lifestyle.  Like all surly teens, my siblings and I hated living “so far out of town”.  It was disparagingly referred to as “the sticks”.  Mt high school boyfriend used to mock, whenever he’d come to pick me up, that he’d just have to grab his passport first. We lived about 7 minutes drive from his house.
How life changes though… Coming back here feels like I can breathe again.  All I hold familiar is here.  I jokingly refer to it at times as “rehab”. I get to rebuild my almost bankrupt sleep debt and enjoy the opportunity to catch up with those I hold nearest and dearest in my world.
If only I could my hands on a pair of those shimmering red magical shoes, then I too would often be caught clicking them.  Because no matter where you live, I can’t help but feel it’s the place where you first began to form your memories and impressions of the world, that will forever bear the humble tag of “home”.

« The Thankful Experiment
An Open Letter to Oprah Winfrey »