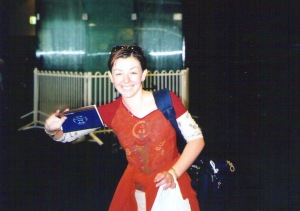 April 17, 2001, a fresh faced 22 year old country girl, who’d never lived outside the confines of her comfort zone, let alone the small coastal town of Coffs Harbour that she’d forever known as “home” weaved her way anxiously through the throng of fellow weary travellers who’d disembarked along with her at Heathrow, a 22 hour flight, and many conflicting emotions trailing behind her.  The day before she had kissed goodbye all semblance of the sad little cocoon she’d been cosseting herself in.  beckoned, and along with it, a bright and bold new universe of adventure.

The emotions swirled so vividly around her largely because of the tumultuous three months prior to this date.  Just as a snake might do its skin, she shed her old life ENTIRELY, commencing a wild rollercoaster ride of giddy highs of excited expectation and equal low measures of dread.    Changing her holiday plans to relocation plans, it effectively entailed quitting her long time employment, applying for a working Visa, selling her car as well as all her worldly possessions.  It also signalled the death knell in a rocky four year relationship, causing her to move back home with her parents until the equally anticipated and feared date of April 16 arrived.  All that was left of life as she knew it was the smouldering ashes of a existence yet to be lived.  And although petrified about farewelling those near and dear, as well as making this enormous leap of faith into the unknown, she had two significant lifelines propelling her onwards.
With her sister already being based in , along with a spookily accurate Clairvoyant prompting her to make this move, she garnered up the mammoth amounts of courage required and dove head first into the deep end of the pool.  Oh yes, she floundered and fought hard to swim to safety, but ultimately she remembered the prophetic words the psychic had uttered, to reassure her she was on the right path for her destiny.
Without it, some of the most treasured memories and friendships she will ever have could not have been borne into existence. When you live so far away from home, friends take on a whole other level of importance in your world. Mates morph into family members and you forge unbreakable bonds that carry you through the lonely homesick times, as well as unforgettably mark the celebratory ones.
10 years on and the travel memories are still lovingly cherished & remembered as if they are inked (much like her little “souvenir” from Camden Town!) permanently in her soul.
Although she is guilty of forgetting it far too often, this is the chapter in her life which eventually established person she is today. The gifts have been many: character building, independence and knowledge, all gleaned from this 18month escape from responsibility.  And once she’d completed this desperately overdue apprenticeship of single life, the universe soon presented her with the supreme reward. Her Husband.
And how do I know all about her dreams and discoveries that were unearthed on this personal tour that became the making of her?
Because this girl was me.  And I say to her, Happy Birthday –I feel but only 10 years young after being reborn on that day a decade before…