It is one of life’s little ironic jokes that at the very time the Doctor is ordering you to take your stress levels down a notch, that of course more curve balls get throw your way. 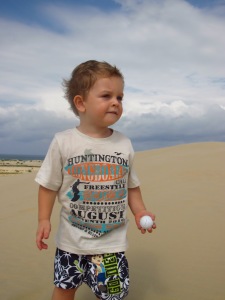 Last night I was relaxing on the lounge with a glass of red and feeling as though I was winning the battle and feeling fine.  Until I heard an unusual cough and cry from the toddler’s bedroom.
Upon inspection, I found him swathed in a sticky pile of his own spew, covering half the confines of his bed.  Ushering him half asleep into the bathroom, where he stubbornly refused a bath or shower, I commenced scraping the vomit, which was thickly plastered all through his hair, face and top half and cursing silently under my breath.  A few hours before we’d been laughing hilariously as he danced naked in the lounge room, full of vim and vigour, to the tunes on MTV.  And now he was about to hurl all my Monday plans out in the same fashion his dinner made a re-appearance on his dinosaur bedspread.
So instead of curling up and watching the end of my show, come 10pm on a Sunday night I was forcibly clogging the drains with the contents of my son’s stomach and planning to do two loads of washing. And because I was erring on the side of fear I bundled the boy into my bed for the night to keep an eye on him. And what with his penchant to sleep in a diagonal fashion and apparent early signs of restless leg syndrome I wore my fair share of kicks in the back during the long night.  Though I should have been thankful for those as at least they meant he was asleep. Unlike 5am. Wide awake and demanding (illness aside) that the day begin.  After a futile 45 minute fight, he won his way.
And did I mention that while this was going on The Husband was blissfully tucked up in a posh Hunter Valley resort?  Ironically (again),  we’d also been invited along but feeling as weary as I had of late I’d declined, thinking a easy weekend at home was exactly what H & I needed, especially considering we’re due away this coming one too. Not such a smart move on my part afterall…
So my plans dispose of the child to an extra day of daycare so that I could get my high blood pressure testing done in peace (you know, without the toddler accidentally inflicting said high blood pressure), as well as enduring the 12 hr fast (easier feat to undertake without a child underfoot) were well and truly thwarted. Can you also believe it is also the only time I’ve known my son to want to share his beloved (and also mine) Vegemite Toast with me.  And I had to decline…!
So the terror toddler trundled along as they extracted litres of blood from my arm. Which was fine except for the fact he proceeded to tip the contents of his sultana packet across the pathology room floor.  That and he announced loudly to the whole waiting room outside “Mummy, why are you weeing into that cup?” when I was in the bathroom collecting my other required sample… It was head down all the way out the door for me!
One crisis was avoided however (Thanks Be To God!) when I rang to inquire if there were any cancellations so as to come in earlier for my blood tests – my appointment could not be found! And then after rushing in as soon as a free spot showed up, I was forced to wait 35 minutes for my turn.  After 12.5 hours of no food crossing these lips it was all I could do not to faint.
Finally, as I was given the all clear to stuff my face, the muesli bar I’d brought along to eat was accidentally propelled from my hand when the pram hit a bump, mere metres from the Surgery door…
And to top the day off in a supreme fashion there were wees on the floor and poos in the underpants just prior to bedtime. Because clearly the last 24 hours had not seen me scrubbing soiled materials enough.
In theory I guess most of this is that “small stuff” I referred to in my previous post.  Still, you can’t help but want to scream just a little; but the soothing voice inside your head reminds you it’s all part of the bumpy path of life.  So no, the million and one chores I’d planned to get done today have not been crossed off the To-Do List, but at least the boy has bounced back to good health.  In fact, in a further twist of irony, he announced, as he woke from his lunch time sleep “I feel all better now Mummy, take me to school.”.  If only buddy, if only….
I can only hope too I bounce back with the same resilience as he! Onwards to tomorrow; a brand new day.  (My birthday, even)

« Babies, the Movie – Your Chance to Win!
Remembering Independence Day – A Decade On »