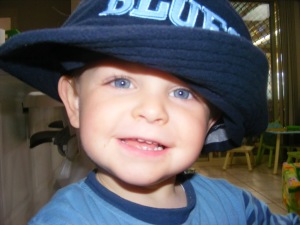 Being the parent of only child often ensures you are at the mercy of a minefield of impolite enquiries as to why you have not yet gone forth and procreated a sibling (which most of you will know I’ve blogged about before).  You don’t enjoy it but you kind of expect it; from certain people anyway.  BUT equally, there are also those in your world who you’d imagine would never put such pressure on you – namely your 2 and a half year old child!?
Sitting with my son this morning, indulging in my morning ritual of casually poring over Facebook as I devoured my beloved Vegemite Toast, breakfast time would soon morph into “food for thought” time after I stumbled across some pictures of a friend’s baby.  Being the curious person that I am, I of course clicked on the album to open and have a good old sticky beak and the cutie pie bub.
That’s when nosy Master Harrison decided to look over my shoulder.  “Mummy, that your baby?” he asked with great interest.
“No darling, Mummy doesn’t have a baby like that one.  You’re my baby!” I tried to convince him but the confused look on his face almost broke my heart.
“So, do you want Mummy to have one of those” I asked tentatively, pointing to the baby on screen, almost afraid to hear his response.  Yet in the spirit of responsible parenting and letting freedom of speech lesson in life commence, I knew I had no choice but to let him his right of reply…
He appeared absorbed in the request, as if giving it the careful consideration it deserved.  And then: “Um Yep!” came the emphatic concurrence to my question, nodding along with exuberant enthusiasm for good measure.
“Ok, so where do we get one from then?” I stalled, a little flummoxed at his definite desire for a sibling.
“Let’s go get one from the shops.  We get one today?” he asks, all innocence and pure light with those big blue eyes boring into mine…
I.Was.Speechless.  What does it say about you when your child is ready to welcome another into the family fold before you are?
Trying to temper his resolve I advised him “now you know if Mummy had a baby you’d have to share all your toys AND your Mummy & Daddy”.  A thoughtful expression floated over his face and he went still.  Thinking I’d caught him out on a technicality, I almost smugly thought I’d won that discussion.  That was, until he offered up this reply. “Yes Mummy, I will share my Daddy with a baby”.  And oh woe is me, if that isn’t the most glowing endorsement he could offer up for wanting a sibling, sharing his beloved father, then I don’t know what is…

« Breaking Dawn (NappyDaze style!)
The Semi-Sea Change Subscription – and how to stay sane… »