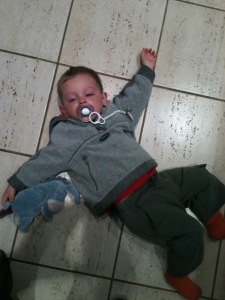 I feel like we are coming out the other side of a cold turkey intervention with Harrison.  Yes, it was time to be rid of his beloved dummy, thanks to a trip to the dentist told us he was in danger of getting a bad overbite.  No problem, she said, as long as we were willing to fork out $7,000 for the pleasure of correcting this slight via braces in about 12 years to come.  It was all I could do not to throw the damn thing in the bin as we left the premises!
Naturally, we had a plan.  And like all first time parents with the best of intentions, it of course sounded much better in theory than it panned out in practice.
We tried to explain the situation in the time leading up to “withdrawal day”, and while my clever clogs Harrison could readily repeat to me that yes, we would pay for his special new toy by handing over his dummy to the lady behind the shop counter and that once we had the special toy, there would be no more dummy.  Ever again.  Sounds workable, right?  Wrong.  Try relaying that message to a distraught, sleep deprived toddler at 3.30am and it’s obvious he is suddenly oblivious to the shenanigans that took place earlier that day.
I’ll admit that after sleep 1 (a daytime nap) went well without the dreaded dummy, we were guilty of being a teeny bit smug about our situation.  But of course the enemy was just lying in wait to ambush us when we were at our tiredest…  Yes, it was the night warfare that would prove the worst; and in hindsight commencing on NYE, after an already late night and being out of routine, we truly were the masters of our own decline.
While I have never witnessed first hand an addict go cold turkey on his choice of drug before, and, not having ever been one to be dependent on anything other than chocolate (or Oprah), it was quite a new experience for me to witness just what its like to break a vicious cycle first hand.
Twitching and tossing and turning in our bed like a washing machine stuck on spin cycle, it became clear that one parent was going to have to take the fall, as there was no point both of us being bitten by the sleep deprivation bug come dawn.  Once we sent The Husband off the spare bed at about 4am, Harrison and I re-commenced the addiction withdrawal duel.   All the requisite “coming clean” trademarks were displayed – screaming, begging, torrents of tears, and an inability to sleep properly.  At one stage, in his desperation he even staggered into our ensuite and curled up in the foetal position on my fluffy bathmat.  Kinda freaked me out that one… Now if that wasn’t a hallmark of fighting off a hooked behaviour, then I don’t know what would be!
Finally, he succumbed to sleep; unfortunately for me it involved me as his human pillow (and mostly leaving me hovering at angles that would make a gold medal gymnast green with envy).  And after a torturously slow process of inching out from under him, careful to not wake the slumbering beast (so to speak!) come 5.20am there was peace restored in our world.  Nearly 3.5 hours after the enemy first fired on us.
Without wanting to jinx ourselves (as definitely done earlier in the process!) things are most certainly on the improve.  Despite me having to explain to Harrison that he was a big boy and therefore did not need a dummy anymore, and him protesting “I don’t wanna be a big boy, I wanna be a little girl” matters are much more manageable.  Now we just need to stay strong in the face of another bad habit lurking in the background of this process and be careful we don’t replace one with another.  Yes, the son of mine who would once rather be anywhere else but suffer sleeping in the same bed as his parents has suddenly morphed into a child who comes visiting in the night and demanding to share our bed, or insisting he is only able to go to sleep if we lay with him and hold his hand….  Hard as it is to reject these rare displays of affection and loving attention (because trust me when I say my son wants nothing physical to do with me until it comes time to go back to sleep) I know it will just prolong the pain.
While I have to almost be physically restrained by The Husband at times, to avoid nurturing this new nasty sleep crutch, I know has to be a big dose of tough love all around to get through to the other side.  It literally kills me to see that tear stained face pleading with me for mercy, and all I want to do is give in.  But the big picture still looms large in my mind and if it’s not now that we are teaching him these new habits, it will just come back to bite us at another time.
So send us your strength as we continue to wage war against potentially exorbitant future orthodontic bills, and its apparent sequel, the battle of the shared bed!