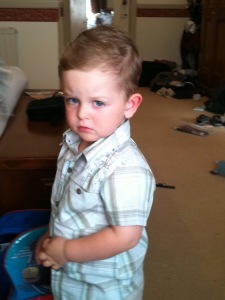 It would appear this week that I am being reminded of the very act that inspired and spawned my entry into the mummy blogging stratosphere. Because, bloody hell, my son is a serious, serial shitting machine and I am about to have to mortgage our house if we have to continue buying nappies at this meteoric rate!

I’m changing six or seven of the well-soiled variety in any 12-hour period. Can all that crap coming out of one small child be considered normal?

And can someone please explain his peculiar penchant to poo with every trip to his playroom? Am I to ban him from its interior, so that I can save some cash on all these barely wet nappies?

I used to think this should be some sort of impetus to start our toilet training – to save the copious amounts of money we’re literally sending down the drain – but now it’s got me to thinking I’ll never be able to leave the house without knowing whether there is a loo in the local vicinity. Such is his “regularity” we’ll be aficionados of every public toilet in the Central Coast area!
I’ve heard of some mums who claim their child is a once a day pooper only (two of his cousins are case in point) and I think what a breeze that must be! Because the act of nappy changing is not an art form that my son is fond of. Indeed, the only way to encourage him to get the deed done immediately is to engage in a ritual which sees me pretend to change the nappies of his Eye-ore, his dummy, a couple of dinosaurs – and earlier this week even his surfboard and golf bag were granted a go! Oh yes, the things you do to convince a stubborn child he really shouldn’t be sitting in his own shit for such long periods of time (which trust me, I am certain he’d happily do!)

At least he hasn’t taken to accidentally eating it, like the poo pandemonium incident of July 2009 – so I can be grateful for small blessings. And whilst I am utterly impervious to poo and have no problem changing copious nappies, its more the bewilderment that one teeny, far from full grown person can missile his way through a 44 pack of nappies in approximately one week…

So what’s the motto to this crap-tastrophe? I think Forrest Gump summed it up best when he coined the catch phrase “shit happens”!!

« The Pursuit of Nappy-ness
Healing & Hope »