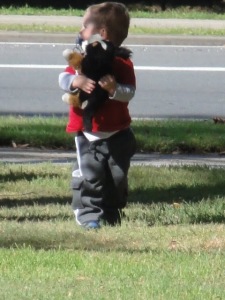 Dear Readers, I’ve an impromptu visit to make back into the NappyDaze, as I have a confession to make… I’ve committed the most cardinal, criminal sin since I could first call my self a Mummy – I’ve lost my son’s most treasured possession, the one that he sought solace and security in; his beloved “Woof-Woof”.

The accidental misplacement of such a cherished item does not sit well with me. The guilt is all consuming, and when you are one of those people who often feel remorse at the most ridiculous trivialities, you can understand I am swimming upstream in a strong current of shame. I envisage its like if the Queen lost one of her Corgi’s – although I concede that may be a bit of a stretch, seeing as though they are real, but you get the picture of remorse I am trying to paint, right?

“Woof-Woof”, a fluffy cattle dog and gift from Harrison’s Uncle Brad at birth, was, like all faithful canine companions, always at his side and would travel everywhere with him. Now each time he asks for it or mentions him (mostly out of habit) I feel like a heavy blanket is smothering my heart and I am almost all too choked up to speak.

However, to my absolute surprise, and to Harrison’s credit, he has been rather “British” about it – stoic, stiff upper lip and all that. He seems to have graciously accepted the line I have fed him – that “Woof-Woof” was sick and has had to stay at the Doctors. He reminds me of it in fact, after automatically asking for him. I think this will work fine until the next time we need to actually make a trip to said Dr (which seems to be happening far too frequently for my liking these days) – because no doubt my son with the memory of an age old elephant, will demand to see his “Woof-Woof” there and then.

The Husband is very matter –o-fact about the whole situation, pointing out there was going to have to come a time eventually when the two Siamese twins were to be separated. Such was Harrison’s strong devotion to this stuffed toy that I was beginning to have visions of it accompanying him to his first day of school, and keeping aside a seat for it at his very own wedding.

And sigh, I am back to feeling that all encompassing guilt again…

So the jury is still out as to whether we can replace the irreplaceable. I recall looking once for a similar one, just in case this cataclysmic event should take place (and I ought to have known it would eventually – one can only juggle so many items expected to be taken in one’s hand bag and not anticipate something in time going astray. Lets face it; it’s been my phone and my keys suffering the curse before!). But alas, it would seem there is only one “Woof-Woof” and now he has been lost to us all. Though I have Poppy on the case, promising to bring a special treat to make up for his absent-minded Daughter’s oversight when he visits this weekend.

There is also the small fact my son still has access to a motley crew of other must have items at his disposal. On the day “Woof-Woof” went missing, I was also forced to leave the house with Eye-ore, his dummy, along with T-Rex and Brachiosaurus. They seem to be bridging the gap and void that “Woof-Woof” left behind.

I suppose what upsets me the most is the sentimentality. This was a treasured toy I’d have loved to hand down to Harrison’s own children, and explain to them how cherished it was, how much comfort it brought him, in the hope they’d seek solace in it too. We never knew this would be the thing he’d cling to, the item that he’d revere amongst all others. Indeed, it wasn’t until he was about 11 months old that his fixation with it became evident. Hence the reason why it was only ever called “Woof- Woof” – we weren’t to know they just how adored it was to become. If we did, surely we’d have given it an actual name!

Harrison, I hope you will forgive your often forgetful Mummy for somehow losing such a precious possession. Farewell “Woof-Woof”, thank you for bringing my son such contentment and peace.