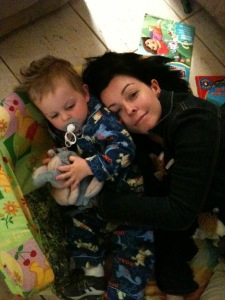 Shell-shocked. That’s often how I feel when I first force open my eyes each morn. Not refreshed, not rejuvenated, and frequently, not ready to tackle the day ahead.
Never one to be labelled a morning person, I’ve always taken a few hours to thaw and kick into gear. Kind of like your old faithful car on a winters morning – takes a few revs to get the ol’ engine to come spluttering to life.

Being a non-coffee drinker doesn’t help. I often think longingly of those people who get their instant kick-start to the day after the first caffeine hit seeps into their veins. Sure, I do have my diet-coke affliction, but when you only allow yourself one offering a day, you’d be silly to use it up too early in the part. Plus there really is something a little gross about downing soft drink before the clock strikes twelve…

What’s prompted this post is the fact that Harrison has progressed into a “big boy bed” and it’s fair to say, he had adapted much better than his Mummy! We have been incredibly lucky thus far; no major meltdowns at having to forgo his formerly beloved cot, and most importantly, no escape antics at any time of the day and night. I’d always had visions of Harrison helping himself to biscuits at midnight or trying take in some taboo late night TV once he was granted leave from behind the bars of his cot. But no. So far he has enjoyed a rather seamless transition – except for one fact. He cannot stay put between the sheets, let alone snooze at the right end of the bed.

You never know where you might find him. The other morning at 2am he was fast sleep right down the far end of his bed, little legs dangling dangerously over the edge. One more wriggle and he’d have found himself on the ground. Indeed the morning before it, he did just that, at about 5am… Hence the trek down the hallway every two hours or so checking and rearranging him so as to ensure his safety.

If I am to be bluntly honest, I’ve always had an unhealthy relationship with sleep. Its why I usually find myself tucked up in bed ridiculously early most nights; partly because of pure exhaustion, but also often to make up for the stretches of sleep I am robbed of at any given time of the night when I’ll stir, leaving my brain kicking itself instantly into gear. Yes, even when I wake and feel shell-shocked, my mind can still be racing at a speed to match Mark Webber.

It’s not uncommon for me to find myself mulling over the days events, or musing about what lays in wait for an hour or so at any given time of the night. The monkeys in my mind swing from vine to vine with an elasticity that would impress even the most flexible of gymnasts.

Then there’s the part of me that, since becoming a mother, has long since lost the ability to relax. An element of me feels like I will never sleep soundly again, just knowing there is a little person down the hall who could wake at any given moment of the night, for any given reason. It’s rather stupid really, as he truly is a great night sleeper, but a stubborn portion of my subconscious refuses let me wind down entirely, hence leaving me rather unnecessarily anxious at the thought of what might lay in wait.

Yes, it could be much worse – I’m all too aware of that. For instance I recall only too well that nothing compares to the most truly draining days of tending to a newborn… But when you are bleary eyed and feel fatigue has been granted permanent residency in your bones, you really cant see past your own bags beneath your eyes that are beginning to rival Paris Hilton’s luggage.

So, perhaps it would be for best if I just attempt to make peace with the tiredness; stop using so much energy fighting and loathing it… It’s just another consequence of the life we live, and simply a par for the course, that once you board this parenthood merry-go-round, you must be prepared to prop open your eyes with matchsticks.