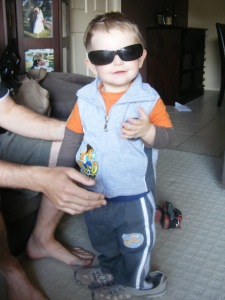 It’s quite something to see your child embark on a magical journey into the land of make-believe. Oh yes, the imagination is a wild and wonderful beast, especially in a toddler, and seeing it unfurled into the world and excitedly explored has been a heart-melting experience for this mummy.

My most treasured moments are the stolen ones where Harrison doesn’t know I am watching. He brings his dinosaur collection to life, whether they be duelling and roaring, or, at the other end of the spectrum, indulging in kisses and cuddles between the mummies and daddies. Who knew the Jurassic era was so caring?

Sometimes I do wonder what seeds are being sown in his “fertile” mind, like when he produced a bottle from the back of the pantry and preceded to tell me it was for “the baby”. Puzzled, I questioned him where this baby might be hiding, since I was pretty sure I’d know if we’d somehow inherited a stranger’s child, or even a DOLL in his toy box. Off he led me to the front door, and, like all kids who lose themselves in the magic of make believe, he began to talk to an imaginary infant, apparently hanging around the entry to our home. He even offered it the bottle saying, “Good baby, have your bottle” while I stared on, entranced by the scene unfolding before me.

I can recall another time, in the bathtub, when his crocodile became the front and centre of his stage. “Poor crocodile sad”, you lamented to me. “He misses his mummy” and then grabbed the toy Princess Fiona figurine and, like all inquisitive kids, made them kiss. Deciding I’d participate in this fractured fairytale, I produced his plastic Diego and suggested the Daddy might like a kiss from the mummy and croc too. Turning to me with mocking eyes you scoffed “Not Diego, he not the Daddy!” as if it was the most outlandish proposal ever! Right, so a character from Shrek and an Australian native reptile can be related in Harrison’s imaginary world, but far be if for a Nick Jnr character to get a look in!

The delightful world of dress-ups has not escaped Harrison’s attentions either. Whether he’s donning my dark sunglasses and strutting in my shoes like a celebrity down Rodeo Drive, or opting for the safer option of traipsing about in The Husband’s footwear, its quite a sight to behold – but how long it will be before he is asking for the matching handbag and earrings I do not know…

Even the darker side of daydreams have woven their way into his world. He’ll not hesitate to tell you if something is “scary” or, as was the case the other night when it was he and I home alone at bath time, that there were monsters near by. And its funny how in those random moments of your child’s ramblings that you suddenly become acutely aware that you are now the one charged with being the brave and fearless one in our little twosome. God knows how I’ll handle him having nightmares, considering at my very adult age I still am haunted (albeit rarely, thank goodness) from them.

Make-believe monsters aside, I’m so thrilled Harrison has taken his first steps on the enchanted journey that is his imagination. As a child its what nourished me most, and to this day, I still wrap its presence and importance around me like a precious shawl of protection. What child will ever be lonely if it has a vivid and vibrant imagination to call upon to brighten the dullest day? May boredom never fester within, my beautiful boy, because fantasy and make-believe will always be blooming and bursting out, nurturing that ever inquisitive brain.