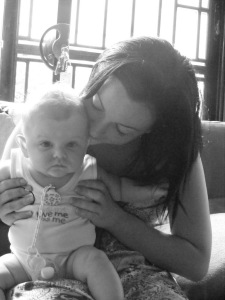 It is a truth universally acknowledged, that a woman in possession of one child must be in want of another.
Ok, so perhaps skewing the famous opening line of one of Austen’s pieces of literary genius might make me sound a little aggressive about this situation I find myself thrust into, but I am bewildered at the barrage of unprompted questions of this nature that I’ve been fielding of late.
It actually feels as if I’ve been deflecting this interrogation since Harrison was knee-high to a butterfly. But the closer he crept to the age of two, the more frequent the inquiries became. It’s as awkward as when a childless couple, secretly trying to fall pregnant, face an onslaught of ill-timed, intrusive, questions regarding their offspring-free state. To me it’s just as delicate and personal a position and one that I struggle to articulate eloquently just why I may decide to be a mum of one.
Friends and family, who know the score of why I am hesitant to head towards a number two child, are forgiven for their questioning – I know it comes from a place of care. It’s the relative strangers (usually smugly in possession of a brood of three or more) who someone manage to make this insecure mum of one feel like a failure for not going forth and increasing the world’s population.
The weekly playgroup I attend is littered with mums of multiple children. Harrison is an anomaly in a sea of several offspring. I know it’s a case of me being silly and insecure but it feels as if I am secretly judged for taking the so-called easy route (no pun intended). I often stare, incredulously, as these brave women patrol their numerous children without so much a sigh or dark circled eye in sight and am bewildered by the conundrum of some who contemplate going back for a third, or God forbid, FOURTH child. I feel like shrivelling into insignificance in their midst. What do they have that I lack, that made them able to go back for more?
Admittedly, I’ll get the occasional flutter of desire to have a second child, but more frequently the thought results in a cold fisted clench of dread encircling my heart, and my mind racing with “do I really have to go through it all again?” To those people who roll their eyes and remark nonchalantly that “you forget the pain of labour the minute its over”, I have three words: third degree tear. Deal with one of those for six months and come back to me and tell me how quickly it was you wiped the agony from your memory.
So you combine the trauma and complications of labour, with failure to breastfeed and a bone fide catnapping child, and viola, it’s a recipe for a single child family.
Perhaps, for me it is also the isolation issue. I think if you have a super support network surrounding you, it might be easier to decide you are up for the challenge to take on the parenthood triathlon yet again… However the lifestyle we have translates into much seclusion for me, meaning some days it feels like I need superhuman strength to survive the 13-hour solo stretches amusing one demanding child – throw a needy newborn into the mix and my sanity might take a beating!  Although I do concede welcoming a second child may be the key to unlocking a social support circle in our new community…

I am sure many conclude the only child is the “nouveau selfish”, or the “easy road” that this millennium’s adults are opting to take. It’s their answer to the childless couple of the 90’s who greedily want to have it all, but not have to also change nappies along the way.

The picture painted is that this is the far too easy option in life and if you are going to give birth only once, why bother to do it at all? They extol the belief that this is bound to induce a life of silver-spoon-esque style of doting on said singular offspring. But what of the financial security you can promise them, having only their education and interests at heart? I mean, there’s a reason that birth control is one of the only industries to have experienced boom times during the GFC – and its not because we have all suddenly become sensible when it comes to sex. Its super expensive to raise one child, let alone two.
Then there is the promise that your undivided attention will always fall to only them, therefore they should flourish under your exclusive concentration. Plus, they need not ever have to vie for your affections – or top spot as the favourite child (c’mon mums and dads, don’t lie, we know you got yours too!). Or, how to save them the embarrassment of having a clingy younger sister/brother constantly begging to be included on their play dates, or the weekends filled to bursting as the scheduled extracurricular activities of multiple children see you trying to go seven different directions in the same timeframe.
And lets face it, being a one-child family would mean one less mini-van or four-wheel drive on the road. Bliss!
I’m aware I’ll be better emotionally equipped the second time around, with the benefit of first hand experience and hindsight offering a huge advantage to heading for number two. But whether all the psychological preparation in the universe can set me up for a successful stab at giving Harrison a sibling remains to be seen.
Some days I’m not unsure a good slap across the face might just do the trick to snap me out of this funk and tell me to just get over it already – its in the past and long may it stay that way (though I am rather stubborn so success is not guaranteed!). I mean my Nan, God bless her, also proclaimed to be only ever having the one child; and she then proceeded to go back for nine more. I suppose, dear Husband, there is small hope for your footy team yet!

« So Gisele, If Breast Is Best, What About The Rest?
Imagination Fascination »