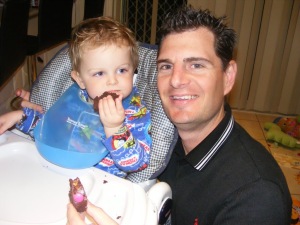 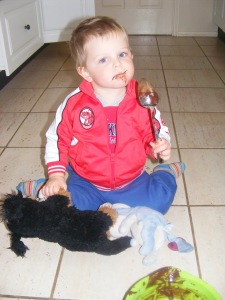 I’ve always been an advocate of the fact that one person can’t be singularly spectacular at everything they try their hands at. The excuse of “you’re skills lie in other areas” has never rung more true than on The Husband’s birthday, when I, his domestically challenged (and ailing with a nasty cold!) wife decided to try and bake him a cake.

The last time I can clearly remember baking anything, other than Mum’s Chocolate Slice, was approximately 18 years ago. It was school holidays and I was at a friend’s house when we decided to try our hands at a gateaux gastronomic exercise– from scratch AND with no recipe. Ambitious, I assure you! Sure, that meant everything from vanilla essence to vinegar got a start and unsurprisingly, it failed to rise very high (I couldn’t actually tell you if we even put flour in that creation, come to think of it…). But I do distinctly remember decorating its outer edges with Rolo chocolates and that did make all the difference to the end taste to this uncultured patisserie palate!

So, after a recent discussion with a work colleague about how as a Mother I really ought to be partaking in this traditional role, I decided my first attempt would be to surprise The Husband with a home-made birthday cake. She eagerly encouraged me it would be a lovely activity for Harrison and I to share in. And she may have been right, had the boy and I both not been suffering from miserable colds, and a severe lack of sleep…

You’d like you couldn’t go too wrong with a packet mix right? Wrong.

Who knew you needed other ingredients like vegetable oil when you were using a packet mix? Not this little brown duck! Thankfully I had some stashed away in the cupboard, along with luckily having 3 eggs left (that I assumed had not gone out of date) and we were on our way. Well, that was until it came time to “combine” the damn thing.

Electric mixer, it stated, was what I needed to blend it all together, set to low. Improvising with the whisk attachment that belongs to our food processor, I could not, for the love of all things sweet and savoury, work out which was the slower of the two settings. Seemed there was a “fast” and a “faster” option!

Opting, of course, for the slower of the two speedy choices, I gingerly placed the whisk into the contents and braced myself for the mixing to commence. And PUFF. Like a mushroom cloud after an atomic bomb, so was my kitchen, and my clothes, covered in a fine film of chocolate cake mixture.

Making a rapid decision to swap to a bigger bowl and see if that helped contain the ingredients within, I  winced in anticipation as my finger pressed down on go. POOF, showering down like a dust storm in the outback we again sent plumes of cocoa dust raining upon us. By this stage, with my nose running like a tap and my eyes stinging not only from the lack of sleep the two nights previous and not the grit lodged in them from the explosions, my son decided to try and get involved in the festivities. Unfortunately for him, with me now unable to read the instructions on the back of the box as they were “caked” in soggy mixture, I wasn’t really in a state to have him acting as my assistant chef. Though goodness knows he might have given it a better shot than me! I’d save him the all important role of licking the bowl clean, to make up for my misgivings as a teacher!

As the end result was put to the test (after a rousing rendition of Happy Birthday TO YOU DADDY from Harrison) I thankfully got the thumbs up from my Masterchef judges. Mind you Harrison would enjoy chocolate scraped from the inside of a garbage bin and Tone wouldn’t have been game to state otherwise, seeing as how his sick wife had gone to so much effort. And I couldn’t realistically tell, having lost all tastebuds and appetite.

So while it may have taken longer to clean up the sprawling mess I’d made than to actually bake the cake, and given that any OH&S organisaton would have named and shamed my cooking school due to the germ ridden state of the chef, I am hopeful that later this month when it’s the son’s second birthday, I will have honed my Nigella Lawson baking skills to produce a picture perfect birthday cake!