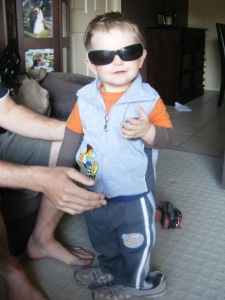 Last week we waved goodbye to a significant chapter of our lives – free flights!

Countless complimentray air journeys have been enjoyed over the last two years; in fact there have been too numerous to count! On my maternity leave it was a Godsend to be able to pack up our sideshow and hitch a ride on The Husband’s work wagon, wherever he may need to travel, or escape to the blissful haven where Grandparent help is on tap. And while the twelve months since I returned to the paid working world saw the opportunities to take flight at a moment’s notice dry up, we are only a little sad that we have now seen the culmination of the no cost air travel.
Cramped conditions en route only worsen as the child grows so sitting on my lap really wouldn’t be too comfortable for either of us from here on in! And as much as Harrison was fairly well behaved for me, I won’t miss the anxious build up to the event where I psyche myself up for the courage to go it alone with him. No more manhandling luggage, prams and child that are equivalent to my body weight and my size, no more attempting to reason with an either over excited or overtired child, and no more holding my breath the entire flight praying he wont scream the whole way.

You see it in the face of my fellow travellers (and prospective flight neighbours) – they are all internally pleading with the powers that be to NOT be afforded the seat next to me and my rambunctious child. Some will still be pleasant en route, some rare gems even resort to being helpful; but mostly, like the last candidate, visibly shudder as they slide apprehensively into the cramped airline chair adjacent to ours. He squeezed his eyes tight and forced a grim smile – and that was it, for the entire trip (which was delayed, en route, no doubt much to his immense displeasure). Sure it probably didn’t impress him when I accidentally doused us all with contents of Harrison’s juice, which must have aerated mid flight. Flipping the lid, it proceeded to spray as if a freshly corked bottle of champagne, right across Harrison & I, the portable DVD player, plus the seat in front. Apologising profusely as I mopped up the contents, he offered but a mere grimace in acknowledgement, and inched further away from our soaking selves.

Really we have been lucky. In the countless flights we have taken there are only three that stand out on the excruciating list. There was a solo flight from Brisbane that I had to make when my boy was 11 months old and I was suffering from a tummy bug and head cold from hell; the flight when Harrison was 15 months old and unable to comprehend my demands that he NOT kick the passenger seat in front, or scream, or wriggle endlessly on my lap in an attempt to escape the confines of our seat; and finally, there was a rather restless five hour journey back from Fiji where it eventually took Panadol to placate my agitated boy.

But I suppose I should offer a special mention to the over friendly male Virgin flight attendant who flirted with this completely disinterested Mummy and saw to it Harrison and I were given a right royal looking after. Nice as it was to be noticed, it was all so unexpected, and unnecessary, if you ask me, as it was quite obvious from the wedding ring and child I was rather otherwise attached! Still, I could breathe easy no one was going to give us a hard time or completely ignore on that trip!
Overall the ratio is in favour of many successful, complimentary flights and if nothing else, I think it has built character that I was able to tackle this somewhat daunting challenge alone, over and over again.
So, pack away the overhead oxygen masks; its automobile air bags to protect us en route on driving holidays from here on in!