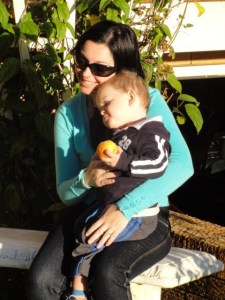 It would seem my son has suddenly (belatedly) cultivated some sort of separation anxiety where I am concerned. He’s only about 15 months late to be mushrooming into the velcro themed stage of a baby’s developmental life whereby they cling to you like a raft at sea and shriek with dispair lest you remove them from your person.

Much as I secretly adore this extra attention being lavished upon me, I’m actually a little unsure how to deal with this whole new Harrison. You see, my boy has always dallied on the side of sheer independence. Never before one to stop and lose himself in a lingering cuddle, and not one in need of being engulfed in a warm hug of bear proportions, he has gone about in his merry life happy enough to nonchalantly rebuff any affection advances – until now.

Perched in his highchair the other night, he wanted nothing more than for me to stand at his side and simply hold his hand. So there we stayed, his little fingers clasped in mine, not even speaking, but not allowed to be separated.
Or at bedtime of late, when he nuzzles his head, koala bear style, into my neck and loops his little arm around it so that it encircles me, pulling me in tightly. I could happily press pause on life at that moment and stay in that embrace until he way, say, old enough to go to Uni!

But this newly minted affectionate side also has its drawbacks. Suddenly going to bed at night involves constant reassurance of “Mummy here? Mummy here?” as I place him in his cot. He grips my hand tightly and rolls into position ready to sleep. Only problem is that he doesn’t wish to let me go and suddenly a tear-free extraction from his grasp is going to be trickier than finding a NSW Origin team that can pull off a win.

It breaks my hearts, because I know he wont want me to leave, and I truly could watch over his serene sleeping face the whole night through but when you have worked so hard to teach your son to sleep on their own it feels fatal to fall back now. So I wait as long as I can, til he is on the edge of sleep and commence the creep from his room. Yes there is then wailing but thankfully before the minute is out there is again silence.

Perhaps it’s the unconscious affection that I adore the most – the running and launching himself at me so as to encircle my legs and hold me close; the demands that he “sit with mummy” which translates into him curling into a ball against my chest and snuggling as long as we can; or the kisses that I am suddenly allowed to smother that too cute face with which were always rejected before. Heck, he was even happy to let me lie with him on his little kiddie lounge a few nights back (a benefit of being small is that we both make a cosy fit on it!), his head happily rested against mine. I even managed to close my eyes for a few minutes and soak up the serenity!

So what has ignited this sudden desire for endless tender attention, and detestation of being apart from his Mummy, I do not know. And as for whether it will last much past the last days of winter and continue to bloom through spring, is anyone’s guess… But the one thing I am sure of is that I will be lapping up this extra loving while it lasts!