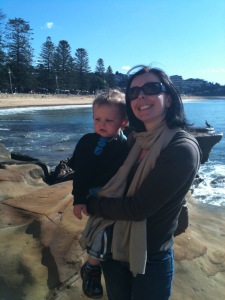 You know that lingering feeling that you have forgotten something vitally important, yet you cant quite pinpoint exactly what has slipped your mind? Like a cloud of suspicion hanging low over your head, seeping into the peripheral of your every thought, its just enough to make total relaxation a touch out of reach. That is, I’ve decided, how it feels to travel sans the son. As if I’ve misplaced my passport in my luggage, or forgotten to check I’ve locked the front door, leaving a vaguely uneasy feeling to wash over me.

Yet, countering this uncomfortable state is the undeniable freedom of movement in which I have to literally stroll at a leisurely pace, caring only for myself. Not being laden down by three bags, a baby and a stroller feels so foreign – and yet so freeing!
However, you do feel torn  – there was the half of my brain doing backflips with excitement of having a whole blissful weekend stretched out before me free from the demands of parental responsibility; a world where sleep-ins were the norm and celebrating with a dear friend was guaranteed. But fighting for a voice was the part of my mind that tried to intone the fear that was stepping out of this motherhood comfort zone, and of “abandoning” my duties as a mother.
But then I cast a glance to the struggling parents juggling kids on hips, laden with luggage and bearing boarding passes in their teeth, chasing spritely children through the terminal, attempting to alleviate boredom and/or tantrums that I decide I can get over the feeling of guilt – and promptly lose myself in my book instead!
Aside from the great need to get away from it all for the weekend, its certainly made me realize I am not missing anything spectacular over the other side of the parental fence. It’s actually now a world that I feel alien from. Have I let myself get that removed from the nocturnal scene that I no longer belong?
Looking at it through the weary eyes of a mother who realises (with a yawn), that while being a parent is actually great practice for the sleep deprived part that goes hand in hand with a Hens Weekend (functioning on 2.5hrs sleep in 40 hrs can do that!), I now recognize that this parallel nightclub universe of sorts is no longer where I belong. Because when did everyone start wearing so little IN THE MIDDLE OF WINTER? I swear the women now dress on a scale of the colder it is, the more flesh they shall bear. Frumpy Mumsy me of course did not recall this rule of thumb hence looked like I was about to ski the slopes of Aspen, compared to my relatively naked for July counterparts. I wanted to tap them on the shoulder and ask if they were going out of their way to catch pneumonia, or whether it was all for the cause that is fashion that jackets just ruin the look they have so painstakingly created.
All the revelry aside, and despite the fact its Tuesday and I still feel like I am functioning at zombie level, the change of scenery and liberty from everyday life chores was oh so welcome! I cant go so far as to say the batteries are recharged but at least I now remember I am not missing out on much after dark!
Returning home to my beautiful boys come Sunday evening, my, didn’t I get the cold shoulder upon my return… Silly me, I’d been envisioning a romantic reunion on par with those Harrison showers The Husband with when they have been separated for a length of time. Not for Mummy, oh no. Burying his head in his father’s shoulder, and icily refusing all entreaties for kisses and cuddles from his absentee Mother, he came right out and said it, “No cuddle Mummy”, and then proceeded to enforce an affection embargo on me, only thawing about an hour later when he seemed to understand I’d returned to stay.
Whether it was his way of making me pay for leaving his side, or perhaps I was being punished for spoiling the party that had been his weekend with Daddy and Uncle Damo, I don’t know. All I can say that only now, 48 hours on, after 2 days of “Mummy coming… Mummy play… Mummy chase” over and over, I see that I am finally forgiven. All that is left is for me to recover and catch up on lost sleep!

« Terrible Two’s – Take a bow, its your time to shine!
Nigella Lawson, I’ll Never Be… »