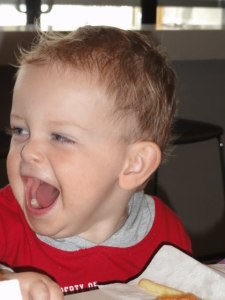 Small children, especially under the age of two (like mine) can be such a riddle when it comes to their characteristics and behaviour. Here’s Harrison, who spouts off his first word at 7 months old, and will proceed to repeat any offering you present him with, (even hippopotamus or delirious!) yet, its only been this week that he has mastered the art of one very important word – YES!

It makes a nice difference to always hearing the word “no”, I assure you!  I concede, there have been times in the past when he has given some sort of verbal agreement to my questions, but now, clear as anything, he will respond to any inquiry with thought, and literally decide yes or no. I just cannot believe he is actually old enough to start considering his answers to my questions – what’s next??? Full blown debates on how they will stem the environmental disaster in the US or whether the Dragons can shed their chokers tag once and for all this Season?

Last night, as I returned home from work, we entangled ourselves into a lovely cuddle on the lounge. He was bathed and dressed in his pj’s, his day at school no doubt but a distant memory. Yet I was able to ask him all about his day and the activities he participated in, and was just fascinated by this ability for him to stop and ponder my query and answer with a definite “yes” or “no”. And conversations – we are starting to mould those into our lives too. “School today Mummy?’ he asked one Monday. “No School today” I replied “but what should we do instead?” Harrison stopped and considered this option… “Hmmmm, swimming!” he replied with gusto. I sat back with a small smile, suddenly overwhelmed by the fact I was engaging in perfect little soundbites of conversation with this little boy who I was still considering as my baby…

So then, one would hope this translates into my wordsmith son starting to grasp the concept of when his Mummy is trying to tell him to do, or NOT do something. He has perfected the art of the blank stare to precision, for example when I tried to stop him from running amok in the neighbours house on Tuesday afternoon. It appears to all and sundry that I might as well be relaying these rules to him in Swahili, but oh, I know now that he is on the cusp of becoing familiar with the rules of our world. Clever little bugger (and, one might add, a typically male trait), he is, so far, being selective with his skills of understanding.

Yes, I deduce the days of me brushing off Harrison’s behaviour “because he is just a baby” are about to come to a swift end. I’m seeing so much evidence of him comprehending conversations and events that I must begin to incorporate this into our everyday world. Let the behavioural battle of wills begin!

« Love Lost
Out of The Mouths of Babes »