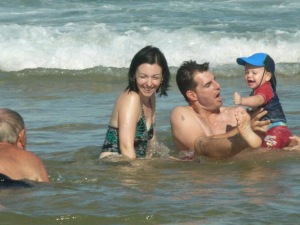 “Work Like You Don’t Need The Money, Love Like you Have Never Been Hurt and Dance Like Nobody’s Watching” – one of the great sayings of our time, if you ask me. And if last Friday night’s antics were anything to go by, I’d say for sure my son is heeding this wise advice – at least where the last part of the proverb is concerned!

Harrison has always been a bit of a groover, there is no denying that. But never before have we witnessed his uninhibited behaviour in the spectacle that is the public arena! And honestly, if I were only allowed to treasure one memory from his short life so far, it would have to be this night. It was a moment in time where you felt that unmistakeable parental pride overwhelm you and you think your heart might just burst forth from your body! And that’s merely from watching him dance in public – imagine if he one day discovers a cure for cancer!

We were out to dinner, our extended family visiting for the Easter break.. Good Friday was to become “Great Friday”, as the band began to play. I should have realised it would be an extra special night, seeing as though the first song played was Adam’s song (and coincidentally it was the anniversary of the night I would say goodbye to him not knowing I would never see him again). Harrison, suddenly was itching to get out of his highchair. After unsuccessfully trying to dissuade him of this idea (so I could finish my own meal in peace), I eventually succumbed to his insistent demands. Lured like an addicted shopper storming the boxing day sales, off he sped towards the dancefloor, taking up prime position in its middle, bopping away to the beat with all the rhythm of an experienced dancer and the joy only an uninhibited child can conjure into reality.

Harrison would have been quite happy to have continued with his solo boogie, but no, instead he was pursued by an ardent admirer in a pretty lemon coloured frock and she saw to it that his hand was clasped in his and a duo dance was had. He was decidedly blasé about her obvious affections for him – dragging his Poppy on to the dance floor appeared to have more appeal to Harrison!

Ask any adult to bust a move on the dance floor (sober, AND with the lights on) and you will most likely be met with a firm NO THANKS. Yet, with Harrison (and, I’d warrant, many other kids) there was no tremulous hesitation on his part, no time for awkward indecision… In fact, I’d imagine there was no single thought at all except for “that looks like fun!” and oh, if only we could all live life that way. To have such freedom of inhibitions, would be utterly liberating… As a parent you can but just hope your child will never feel the constraints of popular opinion or be weighed down by insecurities. May he feel as at ease in his own skin as he was at this age, forever more, and continually live life by one of my all time favourite mantra’s: “Dance Like Nobody’s Watching”

« The Gift of Grandparents
Baby Bootcamp »