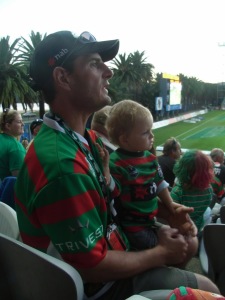 Sometimes it feels like a simple activity such a playing a harmless game with my son is turning into some form of boot camp, with Harrison wielding the imaginary Whistle as Sergeant Major Webeck.
You see, he is not content for his Mummy to sit idly by and watch him play. Instead, a typical play drill goes something along the lines of this:
Harrison: “Fall Down!” (To which I dutifully oblige and lay sprawled across floor). He will then race to my side and place his little hands near my head and order “Push! Puu-uuu-sss-hhh!!” until I am at sitting position. Not appeased he them demands “Up a day, UP A DAY!” until I am on my feet. Then he’ll order “kicking, KICKING!” which means running around with a ball like a crazy person and kicking to him. Throw in a game of catch, and of “tackle and roll away” (his version of footy), it will continue on over and over again until I fall exhausted into a heap. Unfortunately this then unconsciously signals the commencement of a new game – “Nigh Nigh” which warrants jumping all over me. Cue ducking and weaving to avoid being clocked in the head by a wayward kiddie knee.
Of course I am a content contributor to the fun and games to a certain point – its just after the 50th repetition of the active and energetic entertainment, I become a little weary… and unwilling to participate any further…! How then does one extract themselves from this? You get grandparents in to stay – hey presto and you have swapped your combat boots for ugh boots!
In all reality, its probably not a bad thing that my son insists on me being such a ready participant in his games. Finding the time to exercise is proving trickier than scoring a car park at the local Westfield’s on Easter Saturday… Incidental exercise has become the catchphrase of the year. When time (or the overly curious son) does not allow for Wii-Fit, then one must make do via improvisation. And perhaps then the key to keeping the chocolate indulgence at bay is baby boot-camp!

« Dance Like Nobody’s Watching
Three in the bed – and the little one said “get out mummy!” »