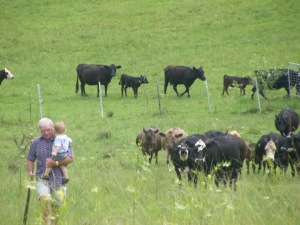 My son has started to cultivate a curious obsession with the Number 2. And no, I’m not making some ribald attempt at toilet humour or reference to which this blog was born (but, if you are wondering, yes, he still does speed through a weekly supply of nappies in about 3 days, especially when we continue to have episodes which require 3 pit stop changes in the mere space of 15 minutes!). Instead, I’m talking about the interesting little fascination Harrison has developed of late, by which all things must said, done, given etc in the multiple of two.
Let me explain this (hopefully not borderline obsessive compulsive!) fixation through example. You give him a piece of banana – he automatically responds by asking for another by saying “Two”. Or perhaps you hand him a matchbox car to play with – his automatic request again is: “two”. Or he will exclaim with delight when he sees a car or truck or bus, and he’ll demand (and expect a response) “TWO BUSES! TWO!!!”

And so on it goes – all things relatable to my son must be carried out to the power of two. I’ll try and say “No, just one” but he’ll emphatically insist that there be two of anything involved in any matter.

Forgive me if I sounds as if I’m bragging – I’m not but give me time – as his numeracy skills could do with some sharpening.

Last month, when paying a visit with his “Pappy” to the Farm, they went walking in search of the cows. Excitedly, Harrison proclaimed “Moo’s, 2 Moos, there’t tis!”. Yes they were cows (he has been known to also label pigs and giraffes Moo’s as well), but he’ll not an accountant make. About 20 of the bovine variety spread out before us in the paddock, quite a few more than the two he was insisting were there!

But still, we cant be too disappointed that from the age of 15 months he started progressing towards tackling the all important “count to 10 skill” (did someone mention bragging??) but God help me, if he does learn another few numbers higher soon, then I am going to have to hire an extra set of hands to attach to me , to try and accommodate carrying and feeding him to sate his numeric fetish!