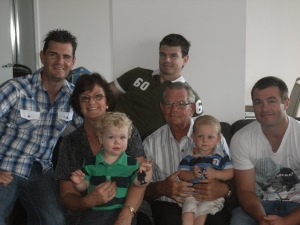 In this day and age, with families flung far and wide, it’s now nigh on impossible for cousins to grow up alongside each other, ensconced in the family fold, the way it used to be. The blood bond however, is one that thankfully stands the test of time and takes the drains of distance. I should know; I have 28 first cousins, all of which are dotted around the eastern seaboard of Australia, meaning gatherings can be few and far between. Yet it’s akin to being a part of an exclusive “next of kin” type club. You simply pick up where you left off, warmed by the naturally shared extended family bond.


This was true for Harrison, this past weekend, when we enjoyed a Webeck get together in Newcastle to celebrate Harrison’s “Mama & Papa’s” 40th wedding anniversary. More than anything else, for him, it meant a much anticipated 2 day play date with his 5mth older cousin Aidan, whom he had only seen about half a dozen times in his little life (and lets face it, those first few encounters fail to count when you consider neither of them really knew they were separate entities to their Mummies!). So this weekend was one of the first times that the boys truly came into their own and began to grow their mutual bond of love, respect and (ambitiously) sharing toy tractors and trains.


From the first squeal of mutual delight, there was a special unspoken bond seared into their sub conscious that shone through in the effortless way in which they giggled, giddy with delight, chasing each other with reckless abandon. At 5am, when the son decided he wanted to get his day under way, it was for “Ad-en” whom he requested he see first up. The peals of innocent laughter that formed the soundtrack to our weekend, will be something that no doubt carries through their entire lives, despite the 5hr distance which separates them.


Too, Harrison has an extra special bond with his much adored big cousin Logan, and baby cousin Mason. Having previously lived only 20 minutes apart, his interactions with the Stewart cousins have been many, varied, and, at times, requiring a patient referee. Yes, Harrison has had to learn the hard way not to get between Logan and his beloved bin truck, but he looks upon his biggest cousin with such unreserved delight that despite any differences of opinion, he is set high upon a pedestal that I suspect no other can emulate.

When it comes to little Mason, his “baby” cousin by one year his junior, Harrison fairly much ignored his entire existence until one dark day when the littlest Stewart was left in the care of Aunty Donna – a day when Harry was definitely in no mood to share his Mummy. Suddenly the nameless and shapeless form who’d merely just existed in the corner of his life, came into existence! But after the bumpy first interaction, he now dearly loves his little “Missin” so much so that every baby he sees is now called by that same name!


So we may be divided by the constraints of distance, but the simple fact that Harrison is lucky enough to have 3 beautiful cousins, and all of which he simply adores, stands him in good stead to mature into adolescence and beyond with the bond of cousinly love !