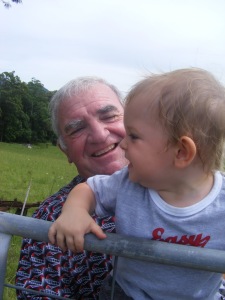 Well what a difference a week makes….
This time last week I felt like I ought to pack myself off to the funny farm for some serious therapy and saddle my son along for the ride to get an expert to re-establish some semblance of routine into his disrupted little life of late but some seven days later the equilibrium has been restored and our happy home is once more. It aint all peaches and cream just yet but safe to say dessert is on the way!

So what has brought about this metamorphose of monumental proportions?

Mainly, having HELP! On the wings on an angel of mercy flew my Dad, arriving on the weekend to save my soul from insanity and keep my son entertained for a couple of days. There is nothing quite as captivating as a beloved “Pappy” to prove to be a perfect distraction while Mummy attends to the mammoth amount of tasks she’d like to achieve before 2011 rolls in. Yes, I FINALLY managed to unpack some of those pesky boxes milling underfoot and found homes for the various paraphernalia that fell previously into the “Too Hard Basket”. Slowly but surely all OH&S hazards are finally being removed, hallelujah!

My Dad has this magical quality of purveying a sense of calm in any situation and so he did with me and my little home. Order once more restored!

Certainly we are all growing more familiar with our new surroundings and community too, which helps. Two sets of neighbours have been met, which include a young family with a boy only a month younger than Master Harry, along with the sweetest old couple across the road, who have that enchanting “surrogate grandparents” feel to them. They even presented Harrison with a gift, upon knowing him for all of three minutes, so you can imagine how won over he is already. He even deigned to give Gloria a kiss goodbye, after knowing her for some 20 minutes total! Harrison has relatives he has seem more and reacted less favourably too…

Thankfully too, the toddler had found his way free from underneath my feet and has taken to not so frequently latching on to my leg and demanding my undivided attention. The previously unexplored is now fair game and it’s now a task to keep up with him as I traipse after his inquisitive little self and see where the trip may take us.

He who would not step on the grass without combusting into tears and leaping for the nearest slab of concrete, has now taken to roaming with abandon up and down the grassy stretches that lay beyond our front fence. This morning for instance, at 8am and feeling rather couped up inside, we toddled off to play out front with his beloved tractor. It wasn’t long til he yearned for greener pastures, and like a nomad who intuitively knows his way, off he set, ploughing through the kerbside grassed lawns of our neighbours, without so much as a cursory glance back at his mummy (who, incidentally had no idea this impromptu pilgrimage was to take place so was forced to squelch through the dewy lawns sans shoes). He’d have wandered the whole avenue through, had I let him. He’d gotten a glimpse of freedom and finally begun to relish the vastness of his new home.

So, its almost as if we can, at last, announce that we are “home”…