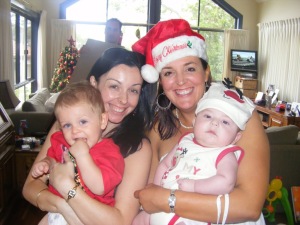 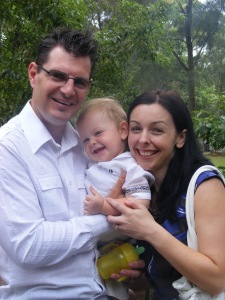 The light at the end of the exhaustive December tunnel has finally filtered through to my line of sight. What a whirlwind month it has been! If it wasn’t enough that we have had to juggle the facets of everyday busy life of work, home and caring for my (often unwell!) little boy, we have celebrated many Christmas festivities, made three tips to Coffs in 5 weeks AND timed it to move house. Well, to be perfectly precise, we are not just moving suburbs, but making ourselves a home in a whole other locality! Yes, its so long Sydney and bonjour Bateau Bay!

But we have somehow survived with our sanity intact and our son even seems to have come through the ordeal in a semi sane state. Sure, he has shown his impeccable timing with 2 colds, conjunctivitis, vomiting, croup and an ear infection all in the last five weeks but hey, if we can endure that on top of the moving logistics, we will weather just about any future battles!

Christmas, while smack bang in the blur of packing boxes and cleaning out accumulated and unwanted crap (no other word for it, I’m afraid!), was truly a special and pleasurable day away from all the pressure of relocating. We were lucky enough to share it not only with our beautiful boy, but our wonderful families too. Thank you to my big sis, the supreme chef and hostess for entertaining us all and making my extended family feel so welcome! May my own attempts one day at emulating the feast and festivities you displayed be just half as good again!

Of course, what is Christmas without the excitement of the little ones? Watching my boy giggle and race around after his big cousin Logan as they excitedly played with their new toys, unfurling presents from under the ornamented tree as Santa’s little (but not always so helpful) helpers and watching their faces morph into utter delight as they discovered the goodies wrapped within.

Yes, Harrison did already have one Christmas under his baby belt but being far too young last year to grasp any significance of the situation, this year he came into his own. Certainly the vivid colours of the various wrapping papers caught his eye and at times overshadowed the gifts, but he sure got the hang of it after stripping back the paper on the first few. He had been fascinated for days when his Poppy came bearing a present that made sounds through its wrapping – needless to say it was the first opened and probably his pick of the bunch so far. Thankfully Mummy has found the off switch on it as its BLOODY NOISY (as all perfect children’s gifts should be, I suppose) and is so sensitive you need only tiptoe past it and its motor kicks into gear!

So, after a crazy last day of work on the 23rd, which filtered into a frantic week encompassing Christmas, a Webeck gathering on Boxing Day, Mason’s Christening the next day and a frenzied final packing the day after for the big move on the 29th and being homeless (well, appliance-less in Kogarah with a roof over our head – VERY difficult to endure when you have a toddler to not only feed somehow but keep entertained!) we waited out in Sydney until we flew to Coffs for another whirlwind few days of people and parties for NYE. So forgive us one and all if you don’t hear from us until February. We may not have the energy to surface until then. I’ll be instead directing my dwindling power supplies to tackling the mammoth unpacking project that awaits along with helping my baby boy (who is daycare-less until almost the end of January) settle into his new abode.

One final footnote for those who may have sympathy for all we have heaped onto our plate this past month – it’s the best way I have found NOT to gain weight over the festive season. Just put yourself on a diet of stress and fill your social calendar to exploding point and you can pretty much eat whatever the hell you want and fear not that those extra kilos will creep on as they usually do come December. Not that I endorse it long term but for now it sure beats the gym!
Happy New Year one and all – may 2010 fulfil all your hopes and dreams for the future!