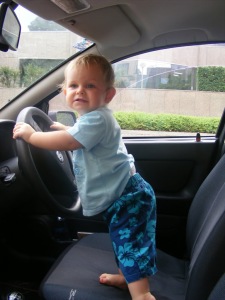 So here we are Central Coast, at last permanent residents of your blissful and sunny shores. After bidding so long to Sydney and saying bonjour to Bateau Bay (a titbit of trivia – Bateau being French for Boat apparently!) we have started to unravel our City selves and remodel them to suit a more relaxed lifestyle. Which I should add, is yet to come…. Something to do with a little fact about unpacking with one hand and entertaining a short attention spanned toddler with another… But I remain ever optimistic that it will start seeping into out lives soon and iron out the Sydney stresses!

The husband went back to work Wednesday which marked the first real test for me. Yes, Day One of Solo Parenting on the Central Coast has been crossed off the calendar – but oh what a loooong day it proved to be, considering Harrison woke at 5.55am and demanded, from the entire other end of the house “Up A Day, UP A DAY!” over an over again, meaning he was insisting that this day get underway and he get out of bed – NOW! Even without the (alarmingly common these days) early wake up call, I admit I was always nervous about this day. In general, the relocation was never going to be the easiest transition for my little guy – he with the already acutely refined memory who, without saying as much, is wondering where the bloody hell we are and when we’ll be heading to our unit again. I can see it in those big blue eyes – he is a little lost and try as we might to explain that this place is now where we call home, I can see he is going to take some time to adjust to it all.

Speaking of his memory, I truly am amazed at how sharp it is – especially for a 16 month old! The previous owners had left a little ceramic dog in the garden bed by the front door and Harrison, when we first arrived two weeks before (and spent only 24 hours here!), excitedly found the “woof woof” and to my utter surprise, a whole fortnight later, as we again approached the front door for that first time, he started saying to me “woof woof, woof woof” over and over again, before pointing it out and saying, in his clever little voice “there’t tis!” With a memory like that, there is no wondering he is missing the previous comforts of home.

Makes it interesting when you are trying to unpack and settle in when you suddenly find yourself with a “Velcro baby” permanently fastened to your hip or clinging desperately to your constantly moving legs. Honestly, he couldn’t be closer to me these last few days unless I was pregnant with him all over again! And when you consider he has just come off the tail end of ten days of doting and undivided grandparent attention, its really no surprise at all that he is expecting me to emulate devoted and endless adoration. Which would be fine if I did not suddenly have a four bedroom home to put together – and, in case you are wondering, we LOVE our house! It’s just frustrating that its still is in a ramshackle half unpacked state (except for Harrison’s room, which is thankfully a domain of solace for him) and between juggling him and getting on with everyday chores I am hopeful we will have the house looking ship shape some time before Easter!

I’ll admit to very strong pangs of loneliness washing over me at various stages today – just the usual variety of the fear of the unknown suddenly striking me, as I knew it would once we got here for good. I desperately miss my sister being so close and shed a few secret tears as we drove away from Sydney on Saturday night. Its an adjustment for us all and I know, once we give it a few months we’ll be the happiest we have ever been in our new community and our new home. Today’s solitude just slams home the stark reality that I need to put myself out there and make the effort to meet people – never an easy feat when you imagine there are already vast networks of long established friendships in place. The husband plans on marching us around the local vicinity and introducing us to our neighbours – a thought at which I’d previously shuddered at (I’m so Sydney in that way) but as he correctly points out, it’s the first step on the path of friendships we hope to forge soon.

So to my new year’s resolution – be far more sociable and open to meeting new people and settling in to our happy new home and life on the Central Coast! And may each day continue to get easier as we go on…

« We Wish You A Weary Christmas…. And A Knackered New Year!
Groundhog Day? »