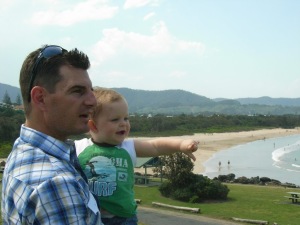 A vocation in communication is appearing to be a likely profession for my son to follow. At 17 months old, I have literally lost count of how many words he now has in his ever expanding vocabulary. Apparently at his age he should have about 20. Triple that figure and I think we might be close…
The husband and I have become quite blasé though about this stunning speech ability. Its not until we set our son upon strangers that we are reminded that this is not entirely a normal trait for one so young. For example, last week we met the sweet older couple who live across from us and Harrison, koala bear style, cuddled shyly into my shoulder and refused all entreaties to interact. That was, until, she generously gave him a present of a book on his favourite thing in the world – transportation!
Well, I thought Gloria might just fall off her sofa lounge in shock when she heard the first ramble roll forth from Harrison’s mouth: “Wow, car, two cars, truck, bus, big bus, WOW!” he babbled in excitement while her eyes grew wide with awe. ‘He’ll be enrolled at university in a few years” she later concluded, after 20 minutes in his chatterbox company!
His new day-care teachers are quite dumbfounded too, by this gift of the gab. ‘Your son is excellent with his words” they praise, and are probably (quietly) pleased they have someone in their under two room who they can attempt to communicate with – or at least try to reason with. Challenging as it is communicating effectively with a toddler, I comfort myself with the knowledge that if he is able to learn new words so successfully then, God Help Me, he’ll soon understand what it means when mummy says “no”!
I think the cutest language quirk he has adopted of late is his grasping of the adult concept of the whisper too. Oh yes, it is quite hilarious to see, complete too with the requisite pointing finger raised to his lips, followed by talking in hushed tones. Aunty Shez takes credit for teaching this feat to her nephew, after a babysitting session when my boisterous son had to be reminded that his baby cousin Mason was sleeping. Now, at the mere mention of Mason’s name Harrison breaks out into “Sshhh, Missin (as he calls him) nigh nigh” and then proceeds to whisper anything further instructions for the next minute. Priceless!
Bathtime is quite appropriately, the best time for him to soak up new words like a sponge. We’ll go through names of his family members or people he’s going to be seeing soon, or things we have seen and, if I can get his attention, he’ll happily try and twist his little tongue around the sounds I am making. A couple of nights ago, leading up to a visit from Uncle Damo, we said his name a few times in the bath, and then for days, that was all I heard “Damo, Damo, Damo…” Though TV has a bit to answer for too of late – watching as many episodes of Go Diego Go as we do, he has just this last day started saying ‘Hola Diego” when he sees him come on screen – a second language already; TV isn’t so bad after all J
This clever, but ceaseless chatter does come with a disclaimer. Cute as it is, you have to be prepared to listen to it ALL DAY LONG. From sun up to sun down, there is Harrison, commentating the whole day through. Travelling in the car is especially where he will come into his own. There he’ll be, offering up a steady stream of “Car! Car! Big Bus! WOW! Bye-bye Big Bus! Truck! Car! Wow!” and so on it seamlessly transfers to every aspect of our day. In fact, I know that if it is suddenly silent it either means he is into mischief or shy in the presence of someone he isn’t yet comfortable with.
So watch out sports commentators, politicians, TV presenters etc of the world, my son Harrison “Have-a-Chat” is snapping at your heels!

« Cartoon Connection
The Power of Two »