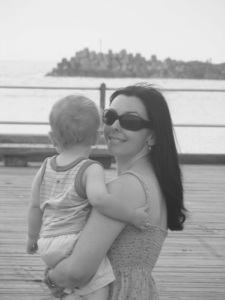 The children’s cartoon world is becoming frighteningly familiar to me. Before I entered this toddler TV realm, I’d naively assumed that The Wiggles and Hi-Five were about the extent of the viewing pleasure on offer. No fear, the choice is (overwhelmingly) endless!
Oh yes, I feel like I have become somewhat of an authority on this subject (which is an alarming thing to admit to – DEFINITELY time to go back to work). With the advent of about 10 different kid’s channels to suddenly choose from in our house, I’ve begun nominating my own favourite shows and too, have a list of those I try to avoid at all costs. Top of which is the bizarre Yo Gabba Gabba – it makes my skin crawl for some reason. As for the peculiar creatures, well they have made their songs and speech far too simple that I am almost embarrassed for them. One day they launched into one about “shaking the silly” out of your system because one of the strange characters was acting a little loco, other times it’s a odd little ditty devoted to the danger of running with scissors. Straightforward, yes, but creative… I think not, when there are often only 3 words total being repeated over and over again…(yet, as the Husband pointed out, this still works for Ms Britney Spears career!). Couple those eccentric looking creatures and ludicrously enthusiastic DJ guy and I cant help but conclude that they are far too creepy for my liking!
I don’t go much on that Iggle Piggle and his motley bunch of unusual friends either. Harrison, however, cant get enough of “Giggle” (as he calls him), therefore much to my dismay we are deigned to visit his wacky world every single day. Maybe I am missing something – perhaps the key to success is in the simplicity?? If only I could have thought up throwing together a bunch of mis-matched made up words and contrasting characters then I’d have surely earned a fortune by now…
And if Harrison isn’t reciting a saying from one of the many shows he’s viewed, then I am. The songs too, they worm their way into your subconscious with an alacrity to alarm even the most resistant mind. Sesame Street’s Ollie busted a rhyme and broke into rap this morning – which is just as well as his “Days of the Week Song” was, annoyingly, taking up permanent rotation in my head. Thank God for some fresh material Ollie!
It’s not all bad, as some learning is at least woven into two of Harrison’s (and my) favourites – Dora The Explorer and Go Diego Go. Oh yes, a little Spanish is being picked up along the way – Hola Education! Soon he’ll be greeting me “Buenos Dias” first thing in the morning and introducing me to his “amigo’s” at day-care. Who needs to enrol at community college to learn a second language when this sort of fare is found on TV???
Then there are the ‘toons that surely were made with adults in mind – The Penguins of Madagascar and Shaun the Sheep spring immediately to my attention. Quite hilarious fodder to consume (Harrison’s Pappy even became a fan of the “Pen-peghns”, as they are known in our home) with some of the jokes and antics bound to be lost on the little ones but sure to get a giggle out of us older folk.
But you know you have consumed far more children’s TV than healthy when you recognise one of the performers from Hi-Five at the airport and unconsciously go to warmly wave and shout hi, as if greeting an old friend.
And if anyone dares diss me for letting my son watch TV in the first place then I’ll have them know not only has it helped expand his already sizable vocabulary (he now tells me which show he wants to watch, quite funny really, considering he’s 17mths old!) but he’s breaking out with the first part of the alphabet, thank you very much, reciting “abc” (thanks ABC 2 channel for that), along with many other new words.
But alas, a long time ago, in a far away galaxy, when my son was not at all interested in TV (and, I’ll admit, I wasn’t in need of the electronic babysitter so much, in order to get things done), I used to have my own schedule of shows to either watch, or at least have as background company. How TV times have changed, sigh… Gone are the days of Sex & The City marathons and re-runs of the Office… I do draw the line at Ellen and Oprah – he is just going to have to share the idiot box when it comes to my two jewels in the TV viewing crown!

« Well what a difference a week makes….
Harrison “Have-a-chat” »