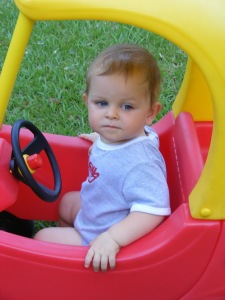 You know you have finally arrived as a bone fide fully fledged and paid up member of the parenthood club when you have experienced your first little emergency room rendezvous – via an ambulance no less!
Then there’s that heart plummeting, soul sickening feeling of fear which twists at your heart who you find you suddenly have one extremely ill child on your hands, who is struggling to breathe no less – who when you put him to be only an hr and a half before, seemed perfectly fine! Yes, you freak out. Silently, of course…
I couldn’t show you, little Harrison, that I was scared, oh no. But after swooping you from your bed and frantically sweeping the surface to see if you had somehow choked in something, I raced around the apartment trying to calm you down, all the while trying to remember what my first aid training would have had me do.

It came down to the fact that I had to make my first (and I hope to God, last) ever 000 call. Sure, Mummy may have over reacted but, my cherished little man, with breath so ragged and laboured I barely knew what else to do. I would never risk losing something as precious as you, so in hindsight it was no overreaction at all.
Bless your beautiful heart, you broke mine as we were whisked outside and into the ambulance. “Ca-a-a-a-r-r” came your standard, but stuttered response as you saw the parked vehicles on the street. I remember thinking “phew, can’t be too bad if he can still summon the strength to say that”. I don’t think I have ever been happier to hear that lilting little voice of yours spring to life!
So we had the diagnosis, confirmed. Croup. Nasty little bugger, which apparently I pinpointed precisely when I described to the Dr that it sounded like there was a seal in your room barking angrily, and, in between each frightening cough was the exceptionally scary sound of you struggling for breath. Textbook definition apparently. You hear that, your Mummy is a veritable Dr-in-waiting!

And finally, I think its safe to say you have truly arrived at the destination of motherhood when you stand and endure your sick child retch and spew forth all the contents of his little stomach directly on to you, so that you are suddenly sporting a thick veil of vomit from head to toe, complete with the chunky chunks of vegies you demanded he digest at dinner a few hrs before. My own fault really – I should have trusted him when he refused to eat… Little did I know I’d be bearing the hallmarks of this indignation much later on!

So you gave your Mummy one helluva scare, Harrison…. And Daddy probably deserves an apology too one day, seeing as though we dragged him from his awards night where he was to receive two awards from his peers. Instead he was helping mop up the oodles of vomit we both were swathed in.

But, despite the fact we both reeked of regurgitated food, I fell in love with you all over again (not that I have ever been out of love with you, oh no!) Clasping your chubby little hand in mine, as I crouched by your bed and stared into those soulful big blue eyes, you staring listlessly back, willing me without speaking to make it all better and for the illness to go away. My heart nearly broke with how you wanted to cling to me, nuzzling your head into my neck in search of solace. If I could have swapped places with you, I’d have done so in an instant! Now all thats left is to face the fact this will no doubt happen again but at least we’ll be better prepared (and no doubt more calm!) the next time we wage war with the nasty Croup!