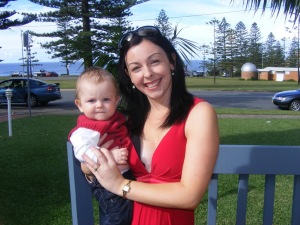 Parenthood can be broken up into solitary moments in time which either make your heart sing or your soul shatter. It’s a road often fraught with dangerous bumps, but one also that leads to bliss.

And I, still very much a novice driver negotiating this rutted road, was blessed to have one such spirit soaring moment yesterday morning, just before leaving the house, bound for work.
My beautiful boy, perched in his high chair, hair askew with stray porridge splattered in its wispy midst, and smears of vegemite daubed haphazardly around his angelic face, began his usual routine of sending me on my way as I clutched my handbag – his cue to start saying “buh-bye” and waving me on my way.
However, on this unique morning, as I lent over to kiss him farewell and remind him that his Mummy loves him, the most memorable moment of motherhood yet came to pass…
“Bye Bye Bubba, Mummy loves you,” I said, kissing his cherubic face, those bright blue eyes shining with his inherent mischievous glint. And then…
“LOVE YOU…!” tumbled forth from the mouth of my baby boy, a cheeky grin punctuating his unprompted, unparalleled display of emotion.
My heart swelled to a size that would rival the whole of the British Empire and I blinked back tears of pride and surprise. Sure, we know he was merely copying me (a feat not overly startling seeing as though he is such a sponge these days when it comes to his ever expanding, amazingly sizeable vocabulary) but it felt like he actually meant it. Like he understood the meaning and emotion behind such a significant saying… And to think, I was lucky enough to bear the fruits of this voluntary offering (and not his often preferred Daddy) – my heart is still smiling!

« Leaving on a Jet Plane, don’t know when we’ll be welcome back again….
Oh what a night… »