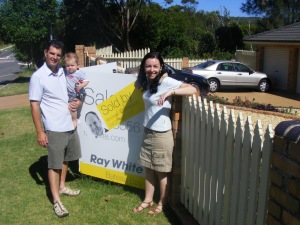 Major milestone moment on Saturday – we got the keys to our new home, the joy of which is largely linked to the fact our son will finally have a backyard! Shame then, that the first time we put him down on the plush emerald green grass, he erupted spontaneously into tears and pleaded “up a day, up a day” for us to rescue him from this obviously threatening and foreign substance.

And there was no joy again when we tried later on that day, and once more this morning. Nope, apparently dusty paved courtyards and dirty footpaths are far more enticing in which to play the day away!


He’ll get used to it, we know – otherwise we have just made a massive error in judgement about needing him to have more space in which to wander without restraint of a tiny enclosed courtyard!


Thankfully though, the interior of the house was a hit. He had free reign to roam from room to room, racing crazily and shouting an exuberant “WOW” as he saw each one for the very first time. That was also his first statement upon driving up to the house – a good sign that he was suitably impressed upon first glance!


I do hope his infantile memory retains some fragments of this momentous day. His joy at the simple things in life is so tangible at present, just the sight of a bus or a bird or a car is enough to produce oodles of joy from him. He could probably happily live in a cardboard box right now and be blissful. Its we parents who have pinned all our hopes and dreams on this one adventure being a success and are sure in time we’ll see the rewards of this risk threefold.


Til then, we must just march onwards with the whole moving process – and try not to forget Christmas is looming large and hope that I haven’t forgotten to buy any important gift…. Harrison, with his impeccable toddler sense of timing has been so sick these past two weeks, after a rather problem free few months before that. So right when we need him at his peak (and also at a time when we need our energy reserves directed solely at surviving the whole moving 1.5hrs away project) he has suffered croup, conjunctivitis, rounded off with an ear infection. Perhaps then the timing is actually perfect? A blast of the crisp, salty sea air of the Central Coast will be a balm for his embattled immune system – and at the same time (once we are all settled in) soothe the stresses of city life for the Husband and I too!

« A duel of devotion
We Wish You A Weary Christmas…. And A Knackered New Year! »