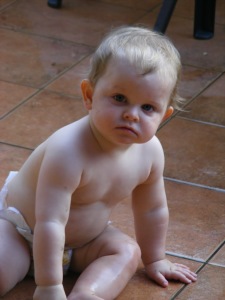 I seem to have lost the knack to relax. I think it disappeared somewhere along with my willpower to resist chocolate, my ability to sleep in (on the rare occasion such an opportunity is presented) and my sanity since giving birth fifteen months before.

Yesterday I was gifted a glorious day to recharge my weary batteries. The Husband being away on a hunting trip to catch elusive glimpse of “Tiger”, has, as such, left our house sans my source of sanity.

So, in order to make life this week that little bit more bearable, I was able to take a day of leave to avoid the car crash pile up that I feared my life would resemble if I was exposed to three days straight of trying to get myself, my son ready and then wrestle him, and our three bags into the car before 7am…

Instead, here is a little run down of how events unfolded in my so-called “Donna Day”

5.30am: I wake to the conspicuous sounds of sobbing emanating from the direction of my son’s room. “Dadda, Dadda” I hear him wail. He’s obviously clued into the fact his beloved father has not been sighted recently and is now making up for lost time in asserting his distinct disappointment at this situation.

6.15am: The crying has reached fever pitch and can no longer be ignored. My vain attempt at doing such was in the hope he might tire himself back to sleep – alas, not the case. Instead he is now ensconsed in my bed in another very vain attempt to extract more sleep from him. Previous to my last entry on his penchant to preferring his own bed in which to doze, I should have of course realised this was doomed from the outset.

8.30am: Silence. The incessant wails and mini tantrums that have infiltrated my morning have been quelled. Harrison has just been dropped off at daycare.

8.35am: The contents of my handbag are now strewn haphazardly around my feet as I crouch to the ground in search of my car keys, last spotted, I realise with a sinking heart, in the chubby hands of my son. Damn, I am going to have to re-enter the fray and find them. After successfully negotiating a tear-free extraction from my son, this prospect does not bode well with me.

8.40am: Car key found in remote and never before used compartment of my handbag. Can almost hear the sniggering of the daycare workers who by now must be shaking their heads in wonder at Harrison’s vague Mummy who, the day before, rang them in a panic to ask them to check if I had locked my car, which I’d left for the day across from the Centre. I expect they give Harrison that much more love and attention as they probably fear his forgetful Mummy might not manage it!

9.45am: I am sprinting across the Westfields Car-Park after grabbing groceries and realise I am running late for my next appointment. Perhaps it was the shoes, perhaps the ground beneath was uneven or indeed slippery, or perhaps it was just plain old uncoordinated me, but I end up getting closely acquainted with the asphalt found usually beneath my feet. Nothing quite like an unceremonious splat in front of fellow shoppers, to leave you with not only a throbbing skinned knee and wrist, along with the flame of embarrassment that licks at your face…

11.05am: Arrive home and decide, in the absence of the husband, to be good and helpful wife and bring in the garbage bin from outside. After failing to locate bin, to my horror, I realise that the garage roller door has automatically shut behind me. With my handbag on the other side. Along with my house keys. And my Mobile. I am now Officially Locked Out Of The House. Joy.

11.30am: After frantically ringing every intercom buzzer in my unit block for a period of 20 minutes, both at the garage and at the front door, finally a bleary eyed man appears at the security door. After explaining myself sufficiently, he lets me in. Its times like this I think I ought to have made more of an effort to get to know my unit neighbours…

By now I am safely tucked away inside and refuse to leave the house for fear of any other catastrophe befalling me… This then signals my so-called window of “relax” time. Great in theory, but in reality I was so wound up tending to my bruised ego and was brutally aware of the neglected shambles my house had become. Then there was the incessant nagging little voice in my head which kept wondering if I shouldn’t perhaps be more productive with this “Harrison-Free Home Time”. So while wrestling with my inner reason, some how time passed so fast that before I knew it, I was due to pick up my son. Having promised them I’d be there early, to make up for the exorbitantly long two days we’d be subjecting him to that week, I went hell for leather to ensure I was there just after 4pm…

For reasons known only to my son, and in some sort of fitting finale to the foul day, he found it necessary to scream and cry without mercy at his bewildered Mummy until bedtime. Apparently he was, and I quote, “an angel” at day-care all day long. Why then did he morph into Lucifer once strapped into his car seat?

So perhaps it was a tough day; it’s over and soon too will be this rant. God bless the blog for venting! Its not all been a waste though – sure, I have learned I can no longer relax. But I’ve also discovered I can get ready for work in 15 minutes flat, get my son to school and somehow make it to work early! And, I can survive. Only just, on days like yesterday (wine and chocolate after 7pm help to re-hinge) but you do enjoy a weary sense of achievement.

But I am not giving up on reigniting the Relax flame, oh no. In fact come this weekend, while the husband and son reacquaint themselves with some quality bonding time, I plan on perfecting the art of relaxing via retail therapy!

« King of his Castle
Harrison Houdini »