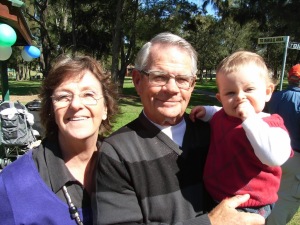 The Grandparents have graced us with their blessed presence this past week, arriving on a mercy mission, at the ready with a steady helping hand, aiming to ensure the husband and I had a rare little break from our active lives. Oh, and not to forget Harrison – lavishing loads of loving attention on him!

We’ve truly been on a roller coaster of healthy highs and ailing lows these past two months and, not having the luxury to recuperate from any afflictions like others with the gift of “Grandparents on Tap”, we’ve ridden the roughs waves as well we could. As well, with our 4 year wedding anniversary falling during the same visiting period, we were actually able to go out and celebrate like any other normal couple might do – who had access to baby-sitters of course! Unlike last year, when Harrison was only 6 weeks old and I was far too bleary eyed to contemplate the effort involved in anything other than my 8pm bedtime, and besides, who’d have wanted to look after a child who only liked to catnap and cry?

Its now back to we three and the whirlwind continues, but we feel invigorated and refreshed thanks to a healthy dose of help from the Grandparents.

Heartbroken Harrison has had to come to terms with saying buh-bye once more but he may not see his Grandma & Grandpa every day, week or month, yet each time the arrive back in his life, he welcomes them with such sincere openness its as if he’s as familiar with them as they are him. There are no awkward exchanges or sidling behind the safety of mummy’s shoulder. He simply adores them and engulfs them with all the adoration and devotion of a grandchild who sees them every day.

So spare a thought for us, those who do not live conveniently close by to your parents or in-laws. You who can call in at anytime and claim a babysitter on hand at short notice… As what we lack in quantity, we make up for in quality. We cherish and make the most of our limited time together; aware it’s a precious commodity not to be taken for granted.